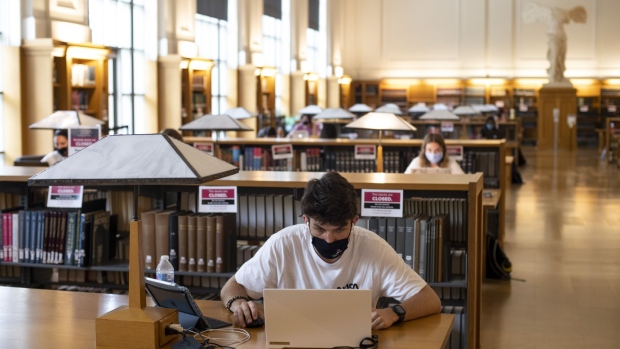 New case counts are declining in some recent hot spots. But they’re spiking in places like Iowa and South Dakota, signaling what may be a new phase in the country’s virus fight as progress in one state is repeatedly offset by infections in others, with little improvement overall.

Politics plays a role, as do events like college reopenings and the Sturgis motorcycle rally. But it’s also a sign of fatigue, the frustration and exhaustion Americans feel after months of masks and hand sanitizer, social isolation, shuttered businesses and closed beaches. People are putting their guard down, experts agree, leaving room for the virus to continue spreading as the country seeks to reopen the economy.

“It’s going to be kind of this rolling fire, with certain flare-ups that occur in different parts of the country at different times,” said Amesh Adalja, a senior scholar at the Johns Hopkins University Center for Health Security. “This is a virus that’s established itself into the population.”

On Wednesday, Anthony Fauci, the U.S.’s top infectious disease expert, urged that infected college students be kept on campus, as sending them back home would help spread the virus over the holiday.

In Iowa, for instance, 10.3 per cent of COVID-19 tests came back positive on Monday, slightly below the 14-day average of 11.1 per cent, according to state data. Overall, the state, which currently has no state-wide mask mandate, has recorded 65,478 cases, with new cases rising 50 per cent in the last two weeks.

Iowa State University, in Ames, reported Monday that 28.8 per cent of the students, faculty and staff tested in the most recent week had the virus, although school officials have focused their testing on people showing symptoms or those who have been exposed to someone with the virus. The University of Iowa has reported 922 cases within its campus population.

Iowa Governor Kim Reynolds, a Republican, acknowledged the jump in cases at a news conference Wednesday.

“For weeks my team has been working on developing a testing strategy with Iowa’s colleges and universities to ensure that they have the testing resources and support that they need to manage the health of their students, staff and communities this academic year,” Reynolds said.

While many of the new cases are among younger people, Reynolds said it’s important to keep elderly residents safe and prevent community spread, adding that aiding long-term care facilities “has been a priority since day one.”

In Ohio, COVID-19 first started as an urban scourge in the cities of Cleveland and Columbus. But the spread is now making waves in rural regions spurred by social gatherings and the return to school, Ohio Governor Mike DeWine said Tuesday during a news conference in Cedarville.

“The virus is not going away,” DeWine, a Republican, said. “We think a significant part of this is caused by our colleges going back as well as our grade schools going back.”

Colleges experiencing outbreaks didn’t necessarily reopen too soon, according to Fauci, the director of the National Institute of Allergy and Infectious Diseases. The problem, he said in an interview Tuesday, was that the schools did not have “the capability of dealing with students who got infected.”

Schools should have tested students before they returned and planned “intermittent surveillance” to watch for rising cases, as well as creating a way to isolate students when they “inevitably” get infected, he said.

On Tuesday, Ohio reported 1,453 cases—the most in more than a month—and the state isn’t seeing signs of the virus relenting. Despite mask mandates, a rule closing bars at 10 p.m., and myriad other health orders, the state’s 21-day average of new cases sits around 1,000.

Per-capita, nine of the top-10 counties for increasing cases are rural, DeWine said. A car-pool trip to a lake led to two businesses closing from an outbreak. A card-game resulted in all family members present contracting the virus, he said.

Social gatherings like this are creating “a real movement into our rural areas,” DeWine said.

Illinois, too, has seen a resurgence of the virus over the last two months, reversing the progress that had lowered counts in May and June. On Aug. 22, statewide daily cases hit the highest since May, and on Tuesday the death count reached the most since June 26.

“We do not want to be part, here in Chicago, of this surge that we’re seeing broadly across the Midwest,” Allison Arwady, commissioner of the Chicago Department of Public Health, said Tuesday.

She noted Iowa, which ranks first in vases per capita, is among the states on the city’s quarantine list and Indiana may be added next week given clusters developing in college towns. In Indiana, the counties in which the University of Notre Dame and Ball State University are located are contributing to a surge in virus cases, according to public health authorities.

“It is not the time to relax your guard,” she said.

But that seems to be happening in Chicago and across Illinois with more cases developing when people at weddings, reunions and other gatherings don’t wear masks, watch their distance or wash hands feequently.

Outbreaks are going to continue to crop up because many states still don’t have the ability to do widespread testing, tracing and isolating, Johns Hopkins’s Adalja said.

“Until they have that capacity, they’re going to always run the risk of these chains of transmission getting started,” he said. “Until we get to the point of being able to do the simple public-health measures in all 50 states, we’re going to have this risk occurring and I do think we will periodically have these flares that occur in different states at different times.”

Even within states, public health officials have struggled to make consistent progress across all of their cities and counties.

California, for instance, managed to stifle outbreaks in the urban San Francisco and Los Angeles areas only to see cases spike in the rural Central Valley.

Mark Ghaly, secretary of the state Health and Human Services agency, said the outbreak appeared to have been driven in part by the valley’s big farms, which employ large numbers of migrant workers. Those workers, mostly Spanish speakers, weren’t hearing the state’s messages about wearing masks and maintaining social distancing, Ghaly said.

While California is now pouring resources into tamping down the valley outbreak, Ghaly said more may follow, even as the state’s overall virus numbers improve. The number of Californians hospitalized with COVID-19 has now dropped below 4,000, after peaking above 7,000 in July.

“We are continuing to learn how to address this broad geography,” Ghaly said. “I’m sure we’ll have some counties that experience increased transmission in the months to come. We feel we’re better prepared than we were in the summer and certainly in the spring.”