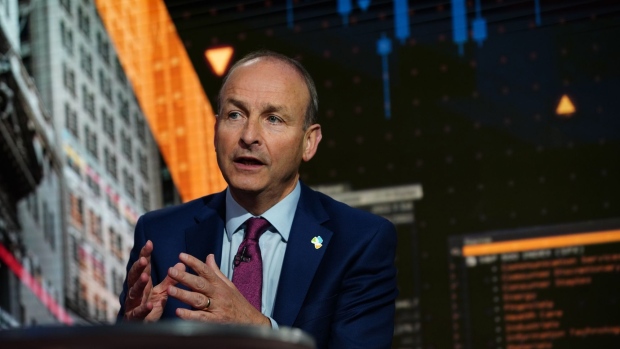 Micheal Martin, Ireland’s prime minister, speaks during a Bloomberg Television interview in New York, U.S., on Monday, Sept. 20, 2021. Martin said he's supportive of a global tax accord but isn't ready to sign on just yet. , Bloomberg

(Bloomberg) -- Some supply-chain issues related to the divorce deal between the U.K. and the European Union remain to be seen since Covid-19 hid some of the impacts of Brexit, according to Ireland’s prime minister.

Those issues “have yet to be fully manifested,” Micheal Martin said in an interview with Bloomberg Television. As new problems emerge, he said the U.K. needs to engage with the same approach as the EU to solve the the Northern Ireland protocol part of the deal. The U.K. has “indicated” to Martin that it will do that.

“We cannot allow it to become an issue that undermines the progress that has been made in Northern Ireland and also we can’t have it undermine what has been a transformative journey in terms of the relationship between Britain and Ireland over the last 30 years,” Martin said of the Northern Irish protocol, the part of the Brexit deal that treats the region differently from the rest of the U.K.

While the global supply chain remains a concern, Ireland has rebounded “quite well” from issues caused by the Covid-19 pandemic, Martin said.