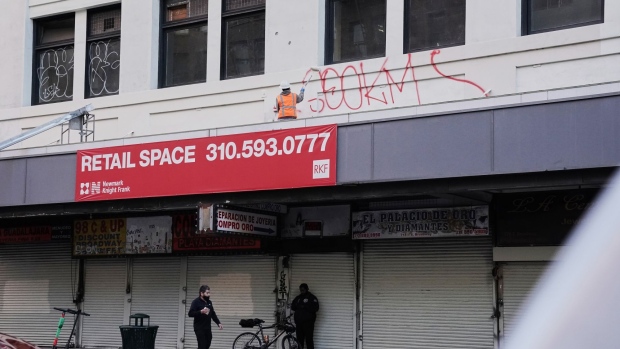 A worker cleans up graffiti over a closed retail space for rent in downtown Los Angeles, California, U.S., on Wednesday, Jan. 5, 2022. Before Covid-19 hit, the gritty district - infamous for its Skid Row homeless encampments and far from the city’s glamorous mansions - was getting remade into a round-the-clock community of new, relatively affordable high-rises within walking distance of museums, supermarkets and sports venues. Photographer: Bing Guan/Bloomberg , Bloomberg

(Bloomberg) -- Troubled real estate loans for the likes of hotels and offices that saw payments get back on track after the 2020 crash are re-defaulting -- signaling more pain for commercial mortgage-bond investors.

At least 13 loans that went 60 or more days delinquent by August 2020 had resumed timely payments at some point, but then re-defaulted between last October and March. That’s according to a new study from Moody’s Analytics focused squarely on loans bundled into commercial mortgage-backed securities.

The main culprit, at least for the retail and office loans, is that commercial landlords who lost tenants during Covid are still having trouble re-leasing space, especially as businesses wait to determine their future needs and hold off on longer-term lease commitments. This will likely cause the overall CMBS delinquency rate to increase in the coming months, Moody’s said.

“There are a core group of loans that have lost tenancy that are struggling to recover,” said Moody’s Analytics researchers led by Darrell Wheeler. “This observation comes from reviewing the underlying troubled loans and finding that many loans had lease expiry challenges before March of 2020. In some cases, Covid may have hindered their leasing recoveries, as many appear to still have lower cashflows and uncertain recovery paths.”

Meanwhile, for hotel loans that re-defaulted since October, it’s still too early to find a common theme, since they all appear to be suffering from their own unique situation, Wheeler told Bloomberg. In fact, hotels overall have had a relatively swift rebound from the depths of the pandemic, and the economic recovery will likely boost their performance further, Moody’s data show.

But the overall percentage of “troubled” CMBS loans -- defined as 60 or more days delinquent, or in forbearance -- increased from 7.78% to 7.89% in February, according to March remittance reports. Moody’s conducted the study by assessing a key credit bellwether for real estate known as the debt service coverage ratio, a measure of whether a property’s income can cover its debt.

There is some good news, however. Seventy other Covid-affected CMBS loans that were severely delinquent as of mid-2020 got their payments back on track since last October, the data show.

Yet the rate of troubled loans transitioning to performing, or paying on time, is decreasing, and “recently cured loans have weaker financials,” the study said.

Vacancy rates for office properties in the U.S. have somewhat risen in the past two years, but for CMBS conduit deals the outlook might be even worse given their exposure to certain urban markets, Barclays Capital strategists said on Monday.

Vacancy rates rose to 12.2% from 9.7%, the bank said, citing CoStar data, but in some markets like San Francisco the increase has been higher.

A 10% to 20% fall in demand for offices in the long term may imperil some CMBS loans, Barclays said.