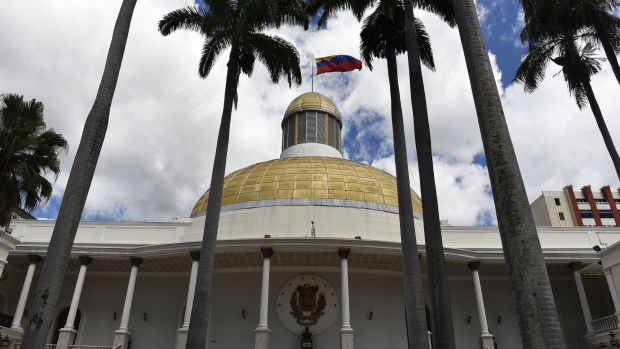 The Venezuelan flag flies over the National Assembly building in Caracas, Venezuela, on Sunday, Jan. 5, 2020. Opposition leader Juan Guaido saw his power base crumble Sunday when Venezuelan government and rebel opposition lawmakers ousted him as president of the National Assembly, in what's been characterized as a parliamentary coup. Refusing to relinquish control of the legislature, Guaido later called an off-site session of congress where his bid for a second term as head of the assembly was met with majority approval, creating what would appear to be, at least for now, dueling legislative bodies. Photographer: Carlos Becerra/Bloomberg , Bloomberg

(Bloomberg) -- Dozens of Venezuelan lawmakers tested positive for Covid-19 Tuesday amid a wave of new infections in the country, delaying the start of a meeting of congress.

Forty-two members of the National Assembly tested positive for the disease on Tuesday ahead of a meeting of the legislative body, according to three members of congress. Another 20 were already out after testing positive last week, they said.

The session, which was set to begin at 4pm local time, was still held as enough of the 277 members were present, but it was delayed while lawmakers awaited their test results. It is being held outdoors, according to members of congress and a live feed from Venezuela state television.

Among the least-vaccinated countries in South America -- with 41% of residents having received the full scheme of shots -- Venezuela has seen the positivity rate more than triple over the past two weeks to 18 cases per 100,000 residents.

Latin America, one of the regions hardest hit by covid, is undergoing a wave of infections as the omicron variant spreads, which has affected governments. Peru’s health, foreign and finance ministers have recently tested positive for the disease caused by the coronavirus.