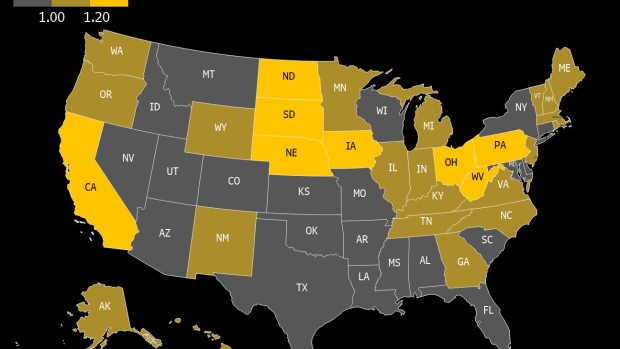 A healthcare worker administers a Covid-19 swab test at a testing site at Tropical Park in Miami, Florida, U.S., on Friday, Aug. 6, 2021. Florida Governor Ron DeSantis had a heated exchange with the White House on Wednesday amid a surge of coronavirus hospitalizations and deaths in his state that’s prompted a political clash over mask mandates and vaccine requirements. Photographer: Eva Marie Uzcategui/Bloomberg , Bloomberg

(Bloomberg) -- Covid-19 cases are falling in many of the original delta-variant hot spots in the U.S. That means the rest of the country could soon follow, dodging the mass hospitalizations and surging deaths seen recently in Florida and the Deep South.

The U.S. is recording more than 1,000 deaths a day, a count that has more than tripled in a month. But in Arkansas and Missouri, where the delta surge began, the seven-day average of cases is down 12% from the peak, according to U.S. Centers for Disease Control and Prevention data. Florida and Louisiana -- the second phase of the U.S. delta wave -- are starting to see similar declines. Cases are climbing in other states, but the pace has slowed.

One of the few immutable truths of the U.S. pandemic has been that viral surges never last more than a few months; then, daily infections decline. But the emergence of the highly infectious delta variant has challenged many assumptions -- including the idea that the pandemic’s end was imminent.

The hopeful scenario has Covid-19 infections on the retreat this month. The wave began in Arkansas and Missouri in early June and ended there about two months later. Florida and Louisiana ignited about two weeks after the Ozarks, and they saw the surge last about 58 days (counting from the first sustained weekly increase in seven-day average cases.) In the rest of the country, the wave turns 60 days old on Monday.

The effective reproduction number -- an estimate of the average number of people to whom an infected person will spread the virus -- is declining in most states, according to Covidestim, a modeling project with contributors from Yale School of Public Health, Harvard’s T.H. Chan School of Public Health and Stanford Medicine.

Numbers below 1 signal that cases are expected to fall soon, and 22 states are already below that level, according to the estimates. The majority of the other states are between 1 and 1.2 and trending lower.

Once the U.S. peaks, some prognosticators think it could see a sustainable lull in cases, thanks in part to the immunity built up over the past couple months. Just since the start of June, Covid has probably infected some 20 million people in the U.S., according to Covidestim’s extrapolations. The fast-spreading variant also scared many Americans who might otherwise not have gotten vaccinated, with about 28 million more people fully inoculated now.

Even if the delta wave flames out soon, improvements could prove short-lived. The hyperinfectious variant could spread anew with college students and unvaccinated schoolchildren returning to classes, as the University of Washington’s Institute for Health Metrics and Evaluation warned last week.

Last year, the Dakotas emerged as a Covid hot spot in early September, just weeks after the summer Sun Belt surge waned. That outbreak eventually swept the Midwest and later engulfed the country.

More recently, there’s the precedent from the U.K.’s own delta wave. Cases peaked dramatically around July 20, plummeted for a couple of weeks, then abruptly started creeping higher again.

That could mean trouble in the U.S., where delta is already hospitalizing and killing more people than many thought possible in the vaccine era. Deaths, a lagging indicator, are likely to remain elevated no matter what happens, based on the high occupancy rates in intensive-care units.

Already, more people are dying in U.S. hospitals with confirmed or suspected Covid-19 than at any time since February, according to U.S. Department of Health and Human Services data.

CDC data and anecdotes from hospital administrators suggest victims are largely unvaccinated, and there are still tens of millions of similarly susceptible people in the U.S.