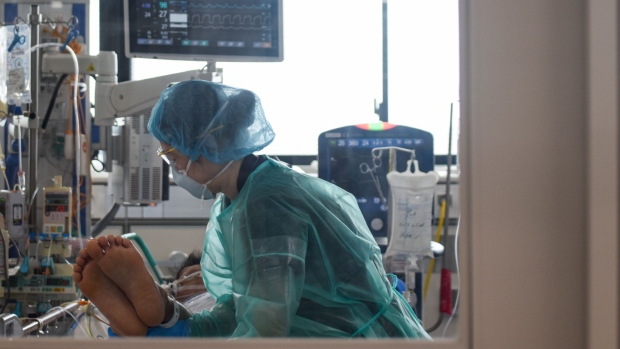 Fumio Kishida arrives for an extraordinary session on Dec. 6. , Bloomberg

(Bloomberg) -- Across the street from one of the busiest train stations in Tokyo, the Shinagawa Prince Hotel is in a bustling complex filled with restaurants, sports facilities and entertainment options like a dolphin show.

Step into the lobby of its east tower, though, and it’s a different world. The only formal greeting guests receive is from Softbank Corp.’s robot, Pepper. They’re given written instructions on their rooms and stay.

That’s because the new arrivals all have one thing in common: they’re infected with coronavirus. In Japan, some Covid patients get a hotel booking -- and can enroll in clinical trials during their stay -- with their positive test results.

The approach offers a respite for a dysfunctional health care system where individual hospitals are able to opt-out of caring for Covid patients, resulting in a situation where patients are being turned away despite available resources. It’s also aimed at reducing the risk of transmission among inter-generational households when space is at a premium in one of the most densely populated countries in the world.

Thousands of Covid Patients Turned Away From Japan Hospitals

Natsuki Tamura, 28, tested positive for Covid in February before the vaccine rollout began. She stayed in a hotel for about eight days in the northern city of Sendai, near where she lives with her parents and grandmother. While she felt tired and had a sore throat, the stay, and the illness, was mostly uneventful.

“I was so thankful because I didn’t want to pass it onto my family,” said Tamura, who runs a coffee truck business. “Everything from the stay to the meal was free. I didn’t find it hard to stay in a room all day because I wasn’t seriously ill and don’t go out much to start with.”

Hotels have become a staple of pandemic control across the world, providing a lifeline to an industry that’s been devastated by the halt to travel. They’re used for quarantine in some areas, particularly Covid Zero countries that screen travelers in isolation before letting them out into the community. In other places, they house the homeless, helping averting outbreaks among groups who don’t always have the ability to stay at least six feet apart from one another.

Some countries in Asia send everyone with Covid to the hospital. While Japan has the most hospital beds per capita in the world, it can’t do that since only about 2.5% of the nation’s 1.6 million beds are available for those with Covid. That’s because many hospitals reject these patients, saying they are small, private and not equipped to handle infectious diseases.

Instead, the government has purchased about as many as 60,000 beds from business hotels like those owned by APA Group, Tokyu Inn Co. and BWH Hotel Group.

In Tokyo alone, more than 70,000 people have stayed at hotels for isolation. Though some Covid hotels took a reputational hit at first, providing rooms for the sick boosted their customer base and improved their brand image in the end, said privately-held APA Group, which operates over 100,000 hotel rooms targeting business travelers nationwide, in an emailed response.

“We agreed to it to help Japan’s health system from collapsing,” the company said.

After someone tests positive, the staff of their local public health center finds them a hospital or hotel room, if necessary. The country’s virus strategy relies heavily on the centers, a web of institutions embedded in the community that do everything from contact-tracing to investigating child abuse.

When the Virus Hit, Japan Already Had an Army of Contact Tracers

“Elsewhere, when you are tested positive for Covid-19, you get medical attention right away,” said Kenji Shibuya, an epidemiologist and research director at the Tokyo Foundation for Policy Research. “In Japan, public health center workers are making medical decisions until patients are severely ill and taken to hospitals. It’s a political failure that the nation can’t prepare hospital beds for them.”

People newly-diagnosed with Covid don’t get a medical exam unless the health center staff decides it’s necessary, or they’re so severely ill they need to be hospitalized. In August, when as many as 25,000 infections were diagnosed daily, 250 people died of Covid at home, according to the National Policy Agency. About half were in their 50s or under.

Prime Minister Fumio Kishida has pledged to increase hospital capacity by 30% to 37,000 by the end of November in anticipation of the next wave of infections. While it has technically reached the target, patients are sometimes being turned away due to staffing shortages.

At the peak of the previous wave, some hospitals refused to take in patients though the official Covid-19 bed occupancy rate was as low as 50%, according to documents by the government advisory panel on the coronavirus in November.

Infections are currently contained in Japan, with an average of fewer than 100 new infections and one death a day. More than three in four adults are fully vaccinated. Concern is growing however that the country’s health system remains vulnerable if infections surge again.

For those staying at a Covid hotel, the visit starts with a ride via a private car or ambulance. They get a room and three meals a day, free of charge.

A nurse calls for routine check-ups, but they otherwise have no contact with others for 10 days. If they have developed symptoms, they must go for three days without a fever before they can check out. Chugai Pharmaceutical Co.’s antibody cocktail Ronapreve is available, and some who want to enroll can take part in a study of Shionogi & Co.’s experimental Covid pill.

They don’t get housekeeping, laundry, fresh air or deliveries from outside. Security guards are present, as much to keep the hotel guests in as to keep them safe. Several have attempted to escape. Hosting patients in hotels can risk exposing workers in the same building. Earlier this year, several staff at a hotel in Tokyo where patients stayed became infected.

For some, the hotels merely put a band-aid on a health-care system that has failed to adapt quickly to the pandemic.

“Did I feel safe there? Not at all,” Makoto Kishimoto, a TV writer, said in a video he posted on YouTube in September about his experience. “You have no idea when you are going to get worse and if a doctor will see you. If they can’t find you a hospital bed when you get worse, you have to keep on staying there.”