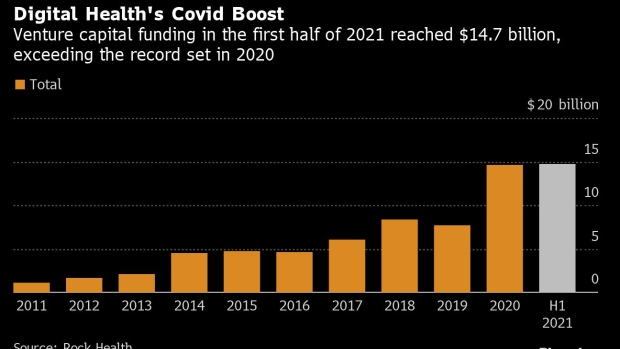 (Bloomberg) -- Bill Geary’s office desk in Boston’s Back Bay neighborhood sits empty and idle, a casualty of the pandemic that stifled so many businesses. Yet the workplace diaspora energized Flare Capital Partners, his venture-capital firm that’s riding a wave of activity in digital health.

As the U.S. made a confused descent into lockdown, Geary and his wife, three sons and two dogs retreated to their vacation home on the Massachusetts resort island of Nantucket. From a makeshift office overlooking the glistening harbor, Geary has been trying to create a transformative view of the industry that established hospitals, insurers and pharma companies haven’t been able to generate.

“The health-care system just isn’t capable on its own of getting there,” Geary says. “That’s the reason why all those segments, including the consumer, have been looking to innovative solutions providers.”

As co-founder and managing partner of Flare, which manages about $450 million, Geary has backed some of the most innovative startups in health tech, such as data analyst Aetion Inc. and medical practice management assistant Suki AI Inc. Bright Health Group Inc., an insurer that helps patients use tech to navigate care, raised almost $1 billion when it began selling shares in June.

Yearly venture funding for digital health doubled to $14.6 billion in 2020, according to Rock Health, and that record high was already topped in the first half of 2021. The sector’s share of venture funds doubled to 11% last year from five years earlier, and Geary still sees room to grow.

Now, established investment firms like Tiger Global Management are entering the space, joining Flare and other specialists in the race to back the best firms. Dozens of others are crowding in.

“So much of that is being invested by what I would call health-care tourists with no prior experience,” said Mohamad Makhzoumi, head of New Enterprise Associates’ global health-care investing practice. “Flare is literally the opposite.”

Families as old as the island’s cobblestones call Nantucket home at least part of the year, along with celebrities and tycoons such as New England Patriots head coach Bill Belichick and Wendy Schmidt, the philanthropist and wife of former Alphabet Inc. chairman Eric Schmidt.

Geary drives a 2000 Jeep near the ferry port, where the rocky streets send a plastic hula girl attached to the dashboard into a wobbling frenzy. A continent away from Silicon Valley’s limelight, Flare is the best-kept secret in health-care investing, Makhzoumi says. In a typical year, the team will look at more than 1,000 business plans and make three to five investments.

That experience is irreplaceable to startups. Not everyone understands how long it can take to build a successful health-care company, says Rushika Fernandopulle, CEO and co-founder of Iora Health Inc., one of Flare’s first investments.

A tech-enabled primary care provider, Iora raised a Series F round in early 2020, a decade after its inception, a timeline some investors might not stomach. Earlier this summer, One Medical said it would acquire Iora in an all-stock deal valued at $2.1 billion.

“You can get cash from a bunch of sources if it’s something compelling,” says Punit Singh Soni, CEO of Suki, which received $7.5 million from Flare. “What you really want is thoughtful support.”

Flare and its companies both lean heavily on the expertise of its network, now a tight community. Before the pandemic, the firm annually hosted Rising Tides, a weekend-long summer retreat for founders and other members of the digital-health community in Kennebunkport, Maine, close to where Flare co-founder Michael Greeley has a home. Guests brought their families to enjoy hikes, cookouts and a costume party; Flare plans to resume the event next September.

There’s some tough love, too. There’s no such thing as a meet and greet with Geary, according to Aetion CEO Carolyn Magill.

“I don’t see any conversation with him as casual,” she says, “which I appreciate and frankly wouldn’t want any other way.”

On a day-long series of Zoom calls in July, Geary showers the would-be recipients of his funds with questions. What’s their market size, traction, position alongside other players? What about hiring? Whom can he introduce them to? Companies already in the portfolio get the same treatment.

With the grilling over, he flashes a peace sign at the computer monitor as his Havanese dogs, Ramón and Rooney, bound into the room. After a call with a company that didn’t get Flare funding, he’s still nagged by doubts.

“Did we miss something here?” he says to a colleague. “You hate to miss one, but maybe we did miss one.”

The enthusiasm for health tech is a reversal from just six years ago, when Geary and Greeley started the firm. The two were competitors when Geary worked at North Bridge Venture Partners and Greeley at Flybridge Capital Partners. At the time, digital health was considered niche and less lucrative than other areas of tech.

In April, 2013, they met for breakfast at Henrietta’s Table, a restaurant inside Cambridge’s Charles Hotel that’s a hub for business leaders in the area’s health-care ecosystem. They wanted to focus on transforming the business of health care, something that will take decades because it’s so complicated, Greeley says over Zoom.

“There are too many acronyms, too many actors,” Greeley says. “Decisions take forever because you have convince multiple people.”

Flare is searching for solutions for a U.S. health care-system that’s sorely in need. Its $3.8 trillion in annual health spending dwarfs all comers, while the country’s ranking of 40th in life expectancy, according to the World Health Organization, suggests that people in Turkey, Croatia, Estonia and a host of other middle-income countries are healthier than Americans.

Geary’s most excited about companies that are rewarded for performance or show they’re making a difference. Aetion, for example, analyzes data to show which drugs work for which patients, ideally helping people see results faster with less guesswork.

Like many in the field, Geary’s obsession with health care originated from personal experience. He grew watching up his father check in and out of Boston hospitals with a chronic heart condition for about 20 years. More recently, his elderly mother-in-law’s challenges near the end of life have also shown signs of the system’s shortfalls.

That’s been the silver lining of the pandemic for digital health: it’s laid bare long-standing issues that tech can address in a setting where change is the only option. That turned out to be a catalyst for Eden Health, a virtual and in-person care startup that Flare began funding in 2020 at the outset of the pandemic.

“I’m optimistic that the arc of history for care just gets better and better,” says Gebremedhin, who led the Eden Health investment, “and there are more solutions for more types of patients who have been underserved in the past.”