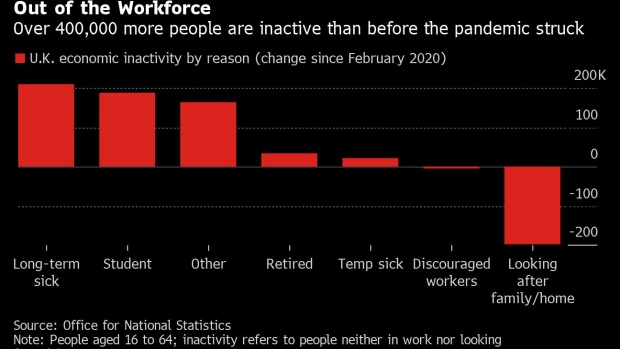 A mental health crisis among working-age Britons made worse by the coronavirus pandemic is driving U.K. labor shortages that are causing severe recruitment difficulties for employers.

Official figures published Tuesday revealed that 411,000 people dropped out of the workforce between February 2020, the month before lockdown, and November last year. Of those, 209,000 were “long-term sick,” which is now the largest single reason for inactivity.

A lack of workers is creating serious problems for companies. The U.K. had almost 1.2 million unfilled vacancies in December despite record hiring, a shortfall that is driving up wages and holding back firms across the economy.

The long-term sick, a category that includes the physically disabled, those with chronic illness and people with mental health conditions, pose a particular challenge for employers as they are harder to lure into the workforce than others who have temporarily dropped out.

Granular data from the Office for National Statistics show that almost the entire increase in those categorised long-term sick during the pandemic has been among people with depression, anxiety, learning difficulties and other mental health issues - rather than physical or chronic illness. The increase may also be linked to long Covid but it is not listed as a cause.

The figures also reveal a sharp rise in mental health issues for both the employed and the unemployed since the emergence of Covid-19. There had been an increase in mental health concerns before the pandemic, but numbers have shot up in the last two years.

“There’s a long-run trend of increased reporting of poor mental health,” said Tony Wilson, director of the Institute for Employment Studies. “The pandemic has probably made this worse, and the growth has been so large that even with employment rising it’s also fuelled very high inactivity.”

Long-term sickness is now the single biggest cause of inactivity, overtaking the number of students not seeking work in the latest data. The numbers of short-term sick, which may capture those with long Covid, has increased by 21,000.

A rise in inactivity for reasons of mental health presents a far more difficult problem for employers than other forms of inactivity, such as the “discouraged” workers who want a job or students.

The annual population survey produced by the ONS shows that inactivity among the long -term sick rose by 274,300 in the year to September 2021 compared with the year to December 2019. Of those, 252,400 reported that they had depression and mental health disorders.