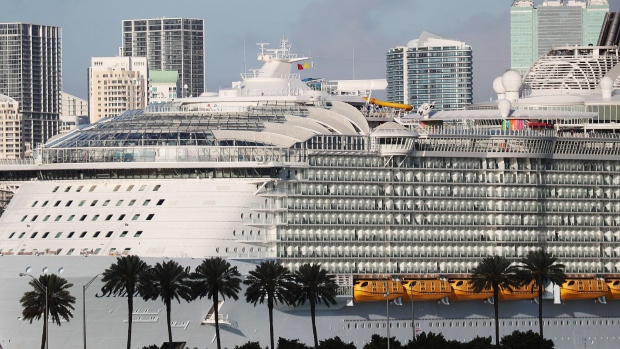 MIAMI, FLORIDA - MARCH 14: Royal Caribbean Symphony of the Seas Cruise ship which is the world's largest passenger liner is seen docked at PortMiami after returning to port from a Eastern Caribbean cruise as the world deals with the coronavirus outbreak on March 14, 2020 in Miami, Florida. U.S. President Donald Trump tweeted yesterday that at his request Carnival, Royal Caribbean, Norwegian, and MSC have all agreed to suspend outbound cruises as the world tries to contain the COVID-19 outbreak. (Photo by Joe Raedle/Getty Images) , Photographer: Joe Raedle/Getty Images North America

The U.S. Centers for Disease Control and Protection identified 89 cruise ships with COVID-19 cases on Tuesday, nearly all of which have met the threshold for a formal investigation.

Democratic Senator Richard Blumenthal urged cruise companies and health agencies to stop ships from sailing, saying they are “repeating recent history as petri dishes of COVID-19 infection.” Operators such as Carnival Corp. have implemented safeguards including mandatory masking and proof of vaccination, but the fast-spreading omicron variant has triggered an increasing number of infections and reports of ships being turned away at ports.

Roger Frizzell, a spokesperson for Carnival, said in an email that “our health and safety protocols put in place have proven to be effective time and time again over the past year with our sailings being restarted across each of our brands.”

Of the 86 cruise ships under investigation by the CDC, Carnival operates 32, Royal Caribbean Cruises Ltd. operates 25 and Norwegian Cruise Line Holdings Ltd. operates 15. Four ships operated by Walt Disney Co.’s Disney Cruise Line are now also under watch, according to the CDC website. The list is rapidly changing and the next stage for ships with outbreaks could involve taking additional public health measures.

“Health and safety is the cruise industry’s highest priority,” said Bari Golin-Blaugrund, a spokesperson for the Cruise Lines International Association trade group, in an email. “In fact, the latest data show that cases have occurred less frequently on cruise ships than on land, with a greater proportion of asymptomatic or mild cases.”

Shares of cruise operators rebounded Tuesday along with the travel sector. As of 12:35 p.m. New York time, Carnival was up 1.2 per cent, Royal Caribbean gained 0.4 per cent and Norwegian was little changed. Of the three, only Royal Caribbean shares have had positive returns this year and they have significantly trailed the broader market, up less than 6 per cent year to date compared to a 27 per cent gain in the S&P 500 Index.