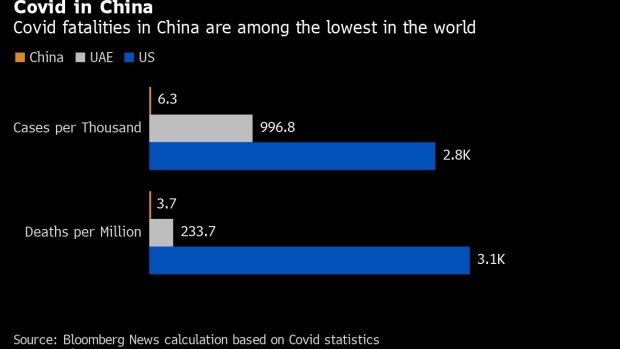 For many people, Covid is an inconvenience that’s become an undesirable part of normal life. Not so in China, where zero tolerance means those who contract the virus have been isolated and often disparaged just for getting infected.

Those who have recovered are singled out during regular mass testing, which people in big cities must undergo at least every three days. A history of infection stored in the health apps that track each person can be found by employers, threatening job prospects. At the extreme, some people have lost their homes and their livelihoods because of Covid discrimination.

One former worker at a government-run isolation facility in Shanghai slept on the streets during parts of June since he couldn’t find work or housing after getting infected. Employers in Shanghai and nearby cities wouldn’t take him, and many help wanted ads specifically said applicants “must not have had Covid,” according to his posts on the social media site Weibo.

He confirmed the experience to Bloomberg News after he was contacted via Weibo, though he asked not to be identified for fear of retaliation. He faced police harassment for previously sharing the information and subsequently left Shanghai. His posts have since been removed.

Stigma tied to Covid was common everywhere early in the pandemic, when people had no idea what to expect and feared contracting the virus. Now, well into the third year, doctors know who’s at risk of serious disease and how the pathogen can spread by wafting through the air. Most people worldwide have scores of friends, family and coworkers who have been infected, and the majority fully recover.

But not in China, where only about six out of every 10,000 people have been diagnosed with Covid - and the vast majority of the 1.4 billion population don’t know any of them. With only 5,226 Covid deaths throughout the pandemic, according to official statistics, the probability of being murdered is higher.

Shanghai’s Hongqiao train station, one of the city’s main transit hubs, became a gathering place for people rendered homeless after getting Covid or for other reasons. One woman, who goes by the nickname A Fen, was found to be partially living in a bathroom stall in the station because she couldn’t get a job due to having been infected, Chinese media reported.

The Covid Zero approach, which deploys strict lockdowns at tremendous economic and social cost, is the main factor driving stigma, said Chen Yaya, a researcher from the Shanghai Academy of Social Sciences. If it doesn’t change, discrimination is likely to continue, she said.

While China has now reined in some of the excesses of the approach, past measures like the wholesale shutdown of factories that detected infection among workers have left a deep scar. Some previously infected workers have struggled to get jobs as supervisors fear such fallout, despite the fact that they likely had some level of immunity.

This lack of awareness about how the virus behaves is common throughout Chinese society because of the low number of infections.

After A Fen’s plight gained widespread attention, authorities including the Shanghai government and the Ministry for Human Resource and Social Welfare said that employers shouldn’t discriminate against those that had Covid. Doing so would, they said, would breach labor laws. She has since been hired by the courier company SF Express, The Paper reported.

The city also updated its health code system, cutting the length of time it stored a person’s Covid testing history to two weeks from two months. The result was that fewer prior infections would show up.

The government orders will have a limited impact for most people, and aren’t enough, said the Shanghai Academy of Social Sciences’ Chen. Authorities should end snap lockdowns in large areas and stop strictly controlling people’s movement, she said. Those with suitable living arrangements should be allowed to quarantine at home.

“By promoting scientific ways to fight the epidemic,” she said, “that’s how Covid discrimination can be fundamentally addressed.”

The stigma is especially hard on the marginalized in China, such as migrant workers. They usually live in cramped conditions, making it easier for the virus to spread. Being turned away from jobs due to an infection has an outsized impact on the group that has few social safety nets and low incomes, Chen said.

Job discrimination against recovered Covid patients is mostly concentrated in Shanghai, which suffered through the country’s largest outbreak, said Aidan Chau, a researcher from the worker’s rights group China Labour Bulletin. More than 613,000 people were infected while the city was locked down.

Workplaces may become irrational in minimizing risks, especially in areas like Shanghai where outbreaks suspended production, Chau said. His group’s partners in other parts of China haven’t reported a similar level of discrimination, he said.

For some, the stigma isn’t as severe as it is pervasive. Carrie Liu, a 34-year-old worker for an Internet company in Shanghai, tested positive in a quarantine hotel in April and was sent to a makeshift hospital for three days. Whenever she feels a bit unwell, colleagues who know she was infected will come to ask if it’s Long Covid, Liu said.

When she goes for mass testing, her swab must be processed by itself since it may show positive due to the sensitivity of the PCR test. Once someone behind her stepped back after finding out she had been infected, she said.

Liu is considering looking for a new job and she’s worried her health history may be an issue.

“I’m not sure how people will judge me if I tell them I was infected,” Liu said. “What I am doing now is to not mention I was once infected to people as much as possible. I really want to wipe out that experience.”