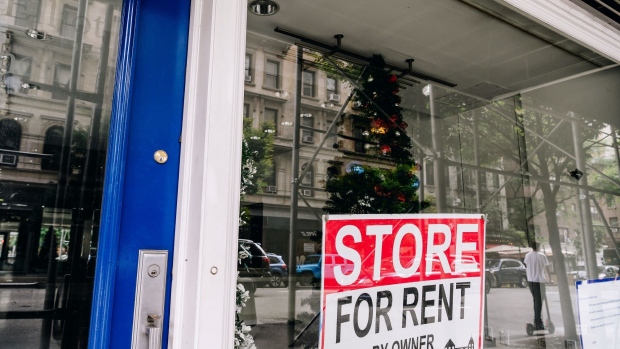 A "Store for Rent" sign hangs in a window of a store on Madison Avenue in New York, U.S., on Saturday, Sept. 26, 2020. The pandemic has battered New York City businesses, with almost 6,000 closures, a jump of about 40% in bankruptcy filings across the region and shuttered storefronts in the business districts of all five boroughs. , Bloomberg

(Bloomberg) -- Inflation pressures and a resurgence in coronavirus cases due to the Delta variant are hampering the recovery of small businesses across the U.S., according to a Goldman Sachs Group Inc. report.

Among the 1,145 respondents surveyed around the end of August, about 75% worry about the impact of rising Covid infection rates on their businesses, Goldman Sachs said Tuesday in its report. Some 86% said they’re concerned about inflation, with 81% seeing an increase in pricing pressures since the firm’s last survey in June. The number of small-business owners who think the U.S. is moving in the right direction has declined in the period.

“There’s been a big sentiment shift when it comes to inflation and workforce challenges,” Joe Wall, national director of Goldman Sachs 10,000 Small Business Voices program, which conducted the survey, said in an interview. Hiring conditions have also deteriorated since June. “Those themes are becoming more and more pronounced in terms of the challenges in addition to access to capital that we consistently hear from small businesses.”

Smaller businesses, typically with fewer than 500 employees, are touted as an engine for economic and job growth and contributed nearly two-thirds of net employment gains in the U.S. from 2000 to 2018, according to the Small Business Administration. As the virus rages on, companies have faced persistent supply-chain disruptions and hiring difficulties.

About one third of business owners said they are very confident they can raise cash if needed, the survey found. Some 44% said their businesses would have less than three months in cash reserves if another shutdown occurred. And 91% of respondents want the federal government to design a long-term, low-interest loan guarantee program.