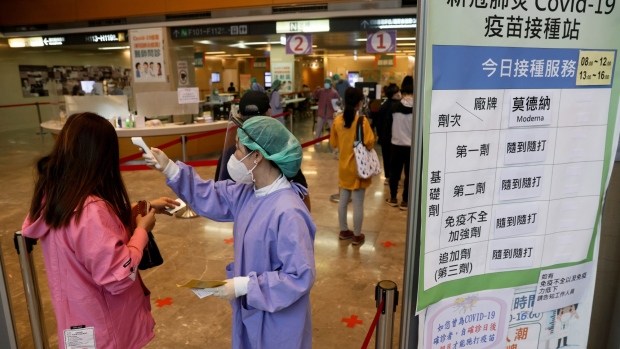 A medical staff checks the temperature of a resident at an entrance to a Covid-19 vaccination center at the Far Eastern Memorial Hospital in New Taipei City, Taiwan, on Monday, May 23, 2022. Lending weight to a gradual shift to living with Covid is the fact that 99% of cases in Taiwan this year have been mild or asymptomatic, according to Taiwan Centers for Disease Control. , Bloomberg

(Bloomberg) -- Taiwan’s worst Covid outbreak has left the island’s insurers bracing for more than $1 billion in claims that the financial regulator is urging them to honor.

The head of the Financial Supervisory Commission, Huang Tien-mu, has ordered insurers to pay out on valid Covid-related insurance policies after they faced criticism from lawmakers for dismissing claims, canceling policies and delaying payouts.

Insurers are looking to limit their losses on policies after underestimating the extent of the disease. There are currently more than 6.3 million still-active Covid-related policies and another million waiting for approval, according to the FSC. This year, insurers have already paid out more to customers -- NT$2.6 billion ($89 million) -- than the NT$2.1 billion in revenue they have received from premiums.

And with only around 2% of policies subject to claims so far and Taiwan’s outbreak showing no sign of abating, insurers are facing a wave of further claims in June and July. Speaking to lawmakers last Monday, Huang said payouts will likely be higher than the NT$41 billion estimate mentioned by lawmakers.

While that is just a tiny fraction of the NT$2 trillion in net assets held by Taiwan’s insurance industry, the majority of those are held by the large life insurers. The potential claims represent around 25% of the assets held by property insurance companies, which were among the most active in selling Covid policies.

Property insurers, which focus primarily on car protection, have struggled to find growth in recent years and saw Covid as a great opportunity, according to Andy Chang, director of Taiwan Ratings Corp. When working out their risk models, many miscalculated the potential number of cases by a factor of almost 100. They also didn’t adequately estimate the necessary capital buffer.

“They shouldn’t have just said, ‘how much are our competitors selling? We want to sell that much too,’” Chang said in a phone interview.

Even Taiwan’s largest insurers are likely to take a hit. Claims at Fubon Life Insurance Co. and Cathay Life Insurance Co. could reach NT$5 billion, equivalent to about 2% of their net income this year, Bloomberg Intelligence analyst Steven Lam wrote in a May 13 note.

The generosity of the policies insurers sold is a major part of the problem. Since the beginning of the pandemic, many companies have offered policies protecting customers against negative health impacts of Covid and the associated costs.

Quarantine insurance is among the most popular. For as little as NT$666 a year, the insurers guarantee to pay out NT$50,000 if the customer is required by the government to isolate. If the client later tests positive for Covid, they can get another NT$50,000.

Until recently, Taiwan had managed to keep the pandemic broadly under control, making Covid-related policies a solid source of revenue. But cases began surging in late April as the omicron variant breached the island’s border controls.

Taiwan recorded more than 90,000 cases on Friday, a daily record, according to data from the Centers for Disease Control. The health minister said around 15% of the population -- about 3.5 million people -- could end up getting Covid.

Siang Lin, a financial industry professional working in Taiwan, bought a Covid insurance policy that he extended once it expired.

“I thought, sooner or later it’s going to blow up here,” he said. “We’re all going to end up getting it -- that’s why I extended my policy.”

Lin was right. He got Covid in early May and is currently awaiting his NT$50,000 payout.