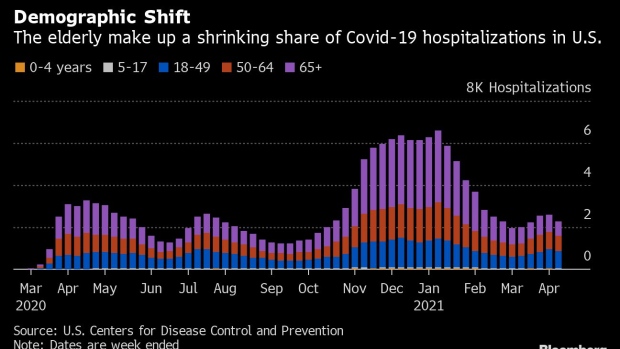 A Palestinian laborer receives a dose of the Moderna Inc. Covid-19 vaccine at a temporary vaccination center at the Rachel's Tomb checkpoint crossing into Israel, in Bethlehem, West Bank, on Tuesday, March 9, 2021. Israel started to vaccinate Palestinian laborers who work inside its borders and in West Bank settlements on Monday, in a boost for Israeli builders and the Palestinian economy. Photographer: Kobi Wolf/Bloomberg , Bloomberg

(Bloomberg) -- Covid-19 infection and death rates in Israel -- the world’s most vaccinated country -- are falling roughly in line with the order in which various age groups gained eligibility to get their shots, according to a study showing the campaign’s impact.

While all Israelis endured a nationwide lockdown and rules on social distancing, the age-tiered declines seen in the study suggest vaccines are playing a major role in blunting the impact of the pandemic. About 55% of Israelis are now vaccinated, giving it a unique standing among researchers as governments globally seek signs their vaccine campaigns are working.

In the U.S., with about 25% of people fully immunized, early data suggests similar trends may be seen as states expand vaccine eligibility to those as young as 16, meeting a Biden Administration deadline. As of April 17, there were an average of 67,442 new cases in the U.S., roughly a quarter of the peak 7-day average reached in January, according to federal data.

The Israeli breakdown shows “real-life effectiveness of a national vaccination campaign,” researchers led by Hagai Rossman of the Weizmann Institute of Science in Rehoboth, Israel, concluded. “Although our findings are preliminary, they have major public health implications for the struggle against the Covid-19 pandemic.”

Covid hospitalizations and severe cases in Israel also dropped by the most among people older than 60, the first group to be eligible to take the vaccines in Israel, according to a study published Monday in the journal Nature Medicine. Declines were then seen among those 50 to 59 as they became eligible, and finally in younger age groups who received shots later.

Israel began rolling out Covid vaccines early this year just as a nationwide surge in cases led the government to institute a nationwide lockdown.

In the U.S., the Biden administration has allocated 28 million doses a week for two weeks in a row, enough to give shots to 4 million Americans a day. But vaccinations in the U.S. have plateaued at 3.2 million doses a day, after a pause in the use of J&J shots last week over safety concerns.

It’s not yet clear if the current trend represents a ceiling on the vaccination rate, or a brief pause in the rise of daily vaccinations like several that have happened before. U.S. states have opened up vaccine appointments to everyone 16 years and older, which could help boost the rate. At the same time, there are signs of surplus building up in some parts of the country.