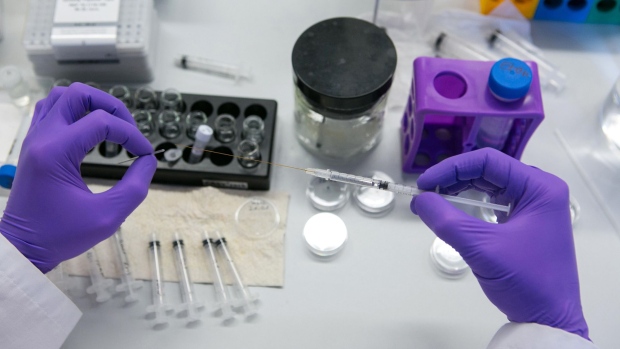 CureVac BV, a competitor in the race for a coronavirus vaccine, soared as much as 206 per cent in its trading debut after raising US$213 million in a U.S. initial public offering priced at the top of a marketed range.

CureVac, based in Tubingen, Germany, is also raising 100 million euros (US$118 million) in a private placement concurrent with the IPO, according to CureVac’s filings with the U.S. Securities and Exchange Commission.

The German government agreed in June to acquire 23 per cent of the company for 300 million euros via development bank Kreditanstalt fuer Wiederaufbau, known as KfW.

The offering was led by Bank of America Corp., Jefferies Financial Group Inc. and Credit Suisse Group AG. Shares of the company, which is being incorporated in the Netherlands and renamed CureVac NV in conjunction with the IPO, are trading on the Nasdaq Global Market under the symbol CVAC.

CureVac, founded in 2000, said in June that it received regulatory approval to begin Phase 1 clinical trials of its COVID-19 vaccine candidate. It said in its filing that it expects the results of those trials in the fourth quarter.

CureVac’s research is focused on messenger RNA, in which the vaccine teaches the body’s cells to identify and attack the virus. Some other companies trying to develop coronavirus vaccines, including Moderna Inc., based in Cambridge, Massachusetts, and German rival BioNTech SE, are already public.