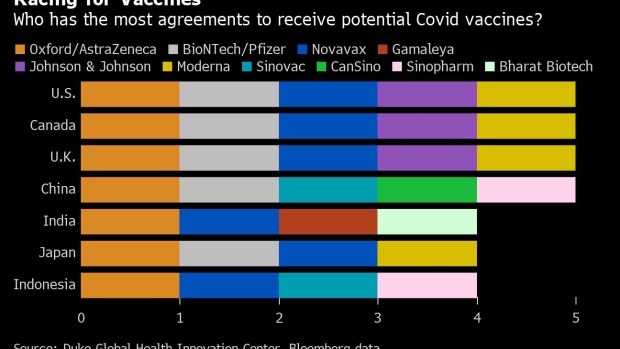 (Bloomberg) -- Before a planned trip to the U.S., Cheng wanted to get vaccinated against Covid-19. To do so, he asked a friend working at a cold-chain logistics company in southeast China to pretend he was employed by the firm, allowing Cheng access to one of the country’s experimental shots.

Cheng, a business-owner from Beijing, now plans to fly to Guangdong province and pay as much as $91 to take two doses of what he believes is a vaccine being produced by a unit of Sinopharm, the state-backed Chinese developer at the front of the global Covid-19 vaccine race.

“You just transfer him the money via Alipay, but he won’t tell you the details because apparently it’s black market,” said Cheng, referring to a digital payments platform that’s used widely in China. Cheng asked to only be identified by his last name as he fears reprisal for speaking publicly.

As developers from AstraZeneca Plc to Pfizer Inc. near the finish line for their coronavirus vaccines, nations are preparing for the challenge of rolling them out, with inevitable supply shortages fueling concerns about inequitable distribution and even the emergence of illegal markets. One place where vaccine delivery is already being road-tested is China, which has allowed local developers’ shots for emergency use since mid-year.

While that program is technically reserved for Chinese front-line workers, such as medical staff treating Covid patients and port employees, Bloomberg spoke to nearly a dozen people who have bent the rules, or know those who have, to get hold of the yet unproven Chinese vaccines. They asked not to be identified, or to just use their first names, so they could talk freely about their experiences, which point to a prevalent practice of working connections and officials to jump the queue.

Unlike western frontrunners, the Chinese vaccine makers have yet to release any public data on the efficacy of their shots in Phase III trials, making it difficult to tell how successful their efforts have been. People are seeking them out nonetheless, particularly those headed outside of China, where the coronavirus has been all but eliminated.

The Best and Worst Places to Be in the Coronavirus Era

“There are substantial opportunities for the vaccine to be diverted to those with connections,” said Rachel Cooper, the London-based director of Transparency International’s health initiative. “Prior to the pandemic, citizens often used personal connections or had to pay bribes in order to access health-care services,” she said, citing research by the anti-graft group that found one in five people across Asia have called in favors to get care.

Despite the fact that the vaccines haven’t received final regulatory approval, hundreds of thousands of people in China have been jabbed under the emergency-use program. That has heightened concern among scientists over potential safety risks.

China National Biotec Group Co., the arm of Sinopharm developing two leading Covid vaccines, has said only that its final stage human trials -- involving more than 50,000 people in countries from Argentina to Egypt -- have been progressing smoothly, and it has not received any reports of serious adverse events in participants.

On Wednesday, Xinhua Finance reported that the company applied for public use authorization for its shots, citing Sinopharm’s vice general manager Shi Shengyi. If approved, it would mean CNBG will be the first developer outside of Russia to reach the general market. Western developers like Pfizer and AstraZeneca are only at the stage of asking for emergency authorization.

CNBG has also inked supply agreements with several countries including Malaysia, Indonesia, Pakistan and the United Arab Emirates, according to public reports compiled by Bloomberg.

Though many are taking the vaccine in China, some remain skeptical.

Jason’s family friends were vaccinated through work connections with officials in the provincial government of Hebei, in China’s north. Some have pressured his family to get inoculated, but he demurred as he doesn’t trust the safety and effectiveness of the Chinese vaccines.

“They are proud that they took the shots,” Jason said. “They see it as a privilege, tout it around, lobbying me and my family to be vaccinated. It’s not hard to have the access if you have some connections in China.”

Staff in government ministries and state-owned companies have found low barriers to access. One person employed at China’s foreign ministry said they were vaccinated with the CNBG shot two months ago because their job puts them into contact with foreigners, even though they don’t travel overseas for work. Many bureaucrats at the ministry have also been given doses, they said.

An employee at Bank of China Ltd. said many of their colleagues were vaccinated before traveling to an expo in Shanghai this month. Another at a state-owned technology company said dozens at the firm were inoculated before they hosted a big forum in September. The tech company’s employees signed non-disclosure agreements and were only offered jabs before the event.

One person said they were able to get access to a vaccine because their parents worked at another state entity. A Bloomberg journalist was even offered CNBG’s shot in the course of reporting this story.

Some, like Cheng, simply want protection from Covid-19 -- proven or otherwise -- before they travel. One Chinese student who needs to return to France next month to complete her MBA found a CNBG booth at a Beijing expo in September offering vaccinations to students traveling overseas.

“I was told this offer to students headed abroad was just a test run,” said the student, who added that the company made clear the vaccine hadn’t been fully approved. By mid-October, after presenting her student credentials, she received her first shot at the company’s factory in suburban Beijing. She was told not to talk about the inoculation on social media and she said students who did post pictures were asked to take them down.

That this is happening in China, which has aggressively contained the spread of Covid-19 since its initial outbreak, may heighten concerns of misappropriation in countries with weak health systems battling higher rates of infection. The pressure on limited supply will likely be acute in neighboring India, which has enormous wealth disparities and the second-worst outbreak globally with more than 9 million infections.

Despite tight travel restrictions, advertising for unverified vaccine tours to the U.S. are popping up across Indian WhatsApp groups. Gem Tours & Travels Pvt. Ltd., a Mumbai-based company planning to run such trips for people to receive Pfizer’s mRNA shot, told Bloomberg they won’t be procuring doses themselves and have yet to nail down travel timings. However, while the firm isn’t collecting deposits yet, they are registering interested clients and collecting passport copies.

Vaccine producers in the country, including the Serum Institute of India Ltd. -- which is running human trials for AstraZeneca and will produce at least a billion doses if its candidate gets the green light -- have played down concerns that the wealthy will hive off scarce batches. They point to government intentions to ration the first set of jabs to front-line workers and the vulnerable before a private market develops.

That hasn’t stopped some calling Serum’s Chief Executive Officer Adar Poonawalla and attempting to get first dibs on any vaccine it brings forward. “I’ve refused, whether you’re rich and powerful or a common friend, I think we all just have to wait,” he said in an interview earlier this month.

“Of course, if there’s some friends and others we can always make a few hundred. It’s nothing, it’s not even a day’s production,” Poonawalla added. “But getting firstly access to all the vulnerable and elderly, the front line workers, is the key.”

Given what’s happening in China, and the enormous logistical challenges of rolling our a vaccine to the entire world, others aren’t convinced it will work out so fairly.

Anil Hebbar, who runs a medical equipment firm and volunteered for Astra’s Covid vaccine trial in Mumbai after a friend died from the disease, knows people who use forged documents to ride on the city’s trains reserved for medical workers. It’s not much of a leap for the 56-year-old to imagine that will also happen once vaccines are deployed across India.

“Everybody will claim to be a nurse now, or a doctor or hospital worker,” Hebbar said. “Human beings will always circumvent things to their favor.”