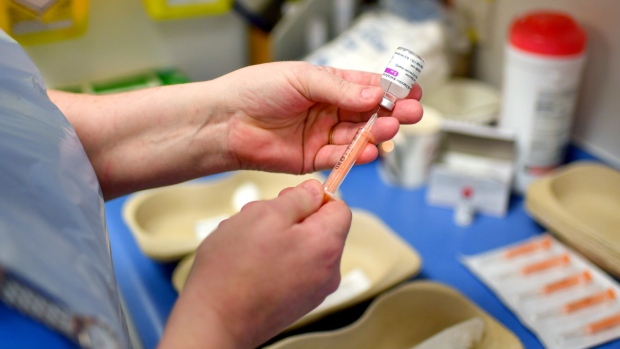 A nurse draws the AstraZeneca Plc and the University of Oxford Covid-19 vaccine into a syringe at the Royal Health & Wellbeing Centre in Oldham, U.K., on Thursday, Jan. 21, 2021. Boris Johnson's government is pinning its hopes on a mass vaccination program to reduce hospitalizations and ultimately deaths, and aims to slowly lift restrictions from March to allow the economy to re-open. Photographer: Anthony Devlin/Bloomberg , Bloomberg

(Bloomberg) -- Babies born to women vaccinated against Covid-19 in England showed no difference in birth outcomes, bolstering the safety profile of the shots during pregnancy.

The rate of stillbirth or low birthweight in babies born to the more than 24,000 vaccinated mothers who delivered between January and August was the same as those in unvaccinated women, according to data released by the U.K. Health Security Agency Thursday. The number of premature births was also similar.

The data is the most in-depth the U.K. has produced to date on the impact of vaccines after birth as Britain struggles with low demand from pregnant women. Only 22% of women who gave birth in August had been inoculated before they had their baby, the UKHSA said.

Vaccine hesitancy among pregnant women is global after this vulnerable group was left out of clinical trials last year, raising questions about safety. The situation was made worse as it became clear pregnant women were also more vulnerable to severe disease, making up almost 20% of the most critically ill patients in English hospitals earlier this year. About 98% of pregnant women hospitalized in England with Covid are unvaccinated.

Vaccine hesitancy is particularly prevalent among ethnic minorities and women living in the most deprived areas in England, the data show, with 7.8% of those in the poorest regions vaccinated while pregnant, compared with 26.5% in less deprived places.

Only 5.5% of pregnant women of black ethnicity were vaccinated at the time of birth, compared with 17.5% of women from a white background, the UKHSA said.

This evidence will “allow midwives and other health professionals to provide better information to pregnant women and help to drive uptake higher,” Mary Ramsay, head of immunization at UKHSA, said in a statement. “It is vital that women of all backgrounds accept their offer of their vaccine.”

No fully vaccinated pregnant women were admitted to intensive care with Covid in England between February and the end of September.