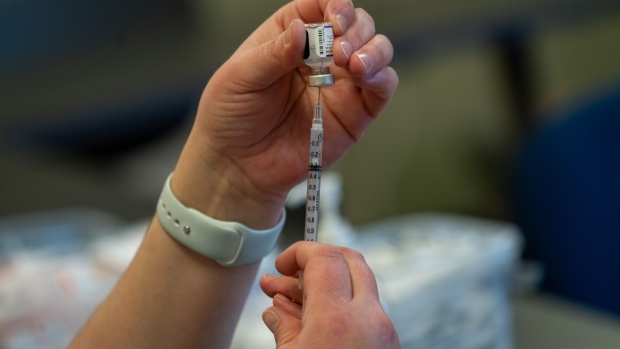 A healthcare worker prepares a dose of the Pfizer-BioNTech Covid-19 vaccine at a vaccination clinic in the Peabody Institute Library in Peabody, Massachusetts, U.S., on Wednesday, Jan. 26, 2022. The state's Covid-19 numbers are improving to the point Massachusetts residents, especially those who are fully vaccinated and boosted, could see significantly lower risk from the coronavirus, according to Tufts Medical Center. , Bloomberg

(Bloomberg) -- Covid vaccines that were developed in record time saved an estimated 20 million lives in the first year of the rollout, more than half of them in wealthier countries, according to the first study of its kind to quantify the impact.

While more than 7 million deaths were likely averted in countries covered by Covax, the World Health Organization-backed distribution program, the research nonetheless highlights the devastation caused by uneven access. About one in five lives lost due to Covid in poorer countries could have been prevented if WHO targets had been reached, data published in The Lancet Infectious Diseases journal show.

Vaccines from companies including Pfizer Inc., Moderna Inc. and AstraZeneca Plc have slashed hospitalizations and deaths, with more than 12 billion doses administered across the planet. But vast parts of the world struggled to get access to shots last year after richer countries raced ahead in purchasing supplies, and concerning new variants, delivery snags and hesitancy have complicated efforts to protect people from the fast-spreading virus.

The global vaccination effort is “a remarkable achievement, and it’s fundamentally changed how the pandemic has progressed,” Oliver Watson, an Imperial College London researcher who co-authored the study, said in an interview. “But we need to learn how we can do better next time because there will be a next pandemic.”

Despite swift deployment, more than 3.5 million Covid deaths have been reported since the first vaccine dose was given in December 2020, the report found. The analysis of records and total excess mortality from each country is the first to estimate the number of deaths averted worldwide, although other research has assessed the vaccines’ impact in specific regions.

High- and upper-middle income countries accounted for the greatest number of deaths prevented -- more than 12 million. Another 599,300 deaths could have been averted if the target of vaccinating 40% of the population in each country with two or more doses by the end of 2021 had been hit, the data show.

More than three-quarters of the deaths averted were due to direct protection against severe illness provided by vaccines. The remaining deaths were prevented indirectly from the reduced viral spread and lower burden on health systems, which improved access to medical care.

More could have been done to extend the benefits of vaccines to a wider number of people, according to a commentary in the same journal. Inequitable distribution of inoculations has increased the risk that new variants will emerge, potentially with the ability to evade vaccine immunity and spark yet another wave of deaths, Alison Galvani of the Yale University School of Public Health wrote. Logistics hurdles, hesitancy and misinformation in both rich and poor countries have hampered the rollout of shots, she said.

The rapid development and distribution of vaccines has been “an extraordinary global health feat,” she said. “Nonetheless, millions of additional lives could be saved by more equitable distribution.”