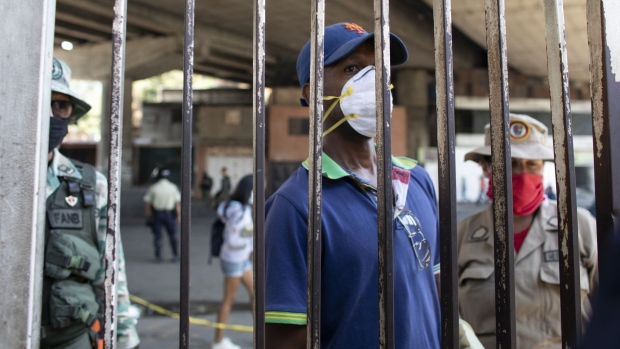 Medical workers, wearing personal protective equipment (PPE), sit in front of a mural of the late President Hugo Chavez, outside of the Ana Francisca Perez de Leon Hospital in the Petare neighborhood of Caracas, Venezuela, on Wednesday, April 15, 2020. President Nicolas Maduro announced that the country's quarantine was extended for an additional thirty days, as confirmed coronavirus cases near 200. , Bloomberg

Juan, a 53-year-old Caracas taxi driver, tested positive last month for COVID-19. His doctor wanted to spare him mandatory quarantine -- the shelters are mostly hellholes -- so she sent him home. Government agents learned where he was and moved him to a center in a western slum.

“I spent three days sleeping on an aluminum chair,” he recalled, asking that his family name not be published to avoid trouble. “They fed us cold rice, lentils and arepas. The place was controlled by armed militias and Cuban doctors.” He was moved to a stadium in the city’s south, where he’s been for two weeks.

Venezuela, which registered few cases in the first months of the pandemic, is now facing a spike and is embracing China’s approach of forced isolation combined with other top-down measures.

But with a hollowed-out health system, far too few tests and a dysfunctional public sector, patients are terrified. They say they’re crammed for weeks into filthy warehouses with little to eat, spotty water supply and increased risk of infection. This, along with the detention of dissident doctors and public shaming of violators, has led to a sense of impending disaster.

Patients and their doctors are avoiding tests to stay away from state-run quarantine centers, leading to greater risks and skewed data.

“This worked in China, which has a much more robust public health system,” said Maria Graciela Lopez, head of Venezuela’s Society of Infectology. “Venezuela was already very short on medical staff. People are afraid. Now patients arrive immediately needing intensive care because they lived with the disease at home until they just couldn’t any longer.”

A number of countries, including Vietnam, Malaysia and New Zealand, have successfully used forced quarantine to reduce spikes in caseloads.

Luis, a 39-year-old electrical engineer, has spent weeks in forced quarantine with nearly 30 others inside a classroom in the western city of San Cristobal after testing positive on the Colombia border. It took him 45 days to walk to Venezuela from Peru, after losing his job there.

“We sleep on old, very worn mats, it’s almost like sleeping on the floor,” Luis said through calls and text messages. The arepas are so small they call them “botones,” or buttons, he said.

“Today I gave mine to a child,” Luis said. “They are always hungry.”

President Nicolas Maduro, under punishing U.S. sanctions, has made a point of announcing that Venezuela is following the model of one of its allies, China.

“Venezuela has paid attention to every single step and learned big lessons from China,” Maduro said in April after a phone call with his Chinese counterpart Xi Jinping. “It has inspired our decisions in how to face this pandemic.”

But things haven’t gone well. Quick tests often give false positives so healthy people are mixed in with the sick. Ailing adults and children have gone hungry. Few tests are taken and the results rarely come in on time, if at all.

“The conditions at these centers suggest there’s violations of basic human rights and protections,” said Kathleen Page, professor at the Johns Hopkins University Division of Infectious Diseases. “This feels punitive and will certainly be a disincentive to testing. More transmission will occur in the community as people who don’t get diagnosed with COVID are not likely to self-isolate.”

Venezuela’s health ministry and vice-presidency, which oversee the response to COVID-19, didn’t respond to several requests for comment. 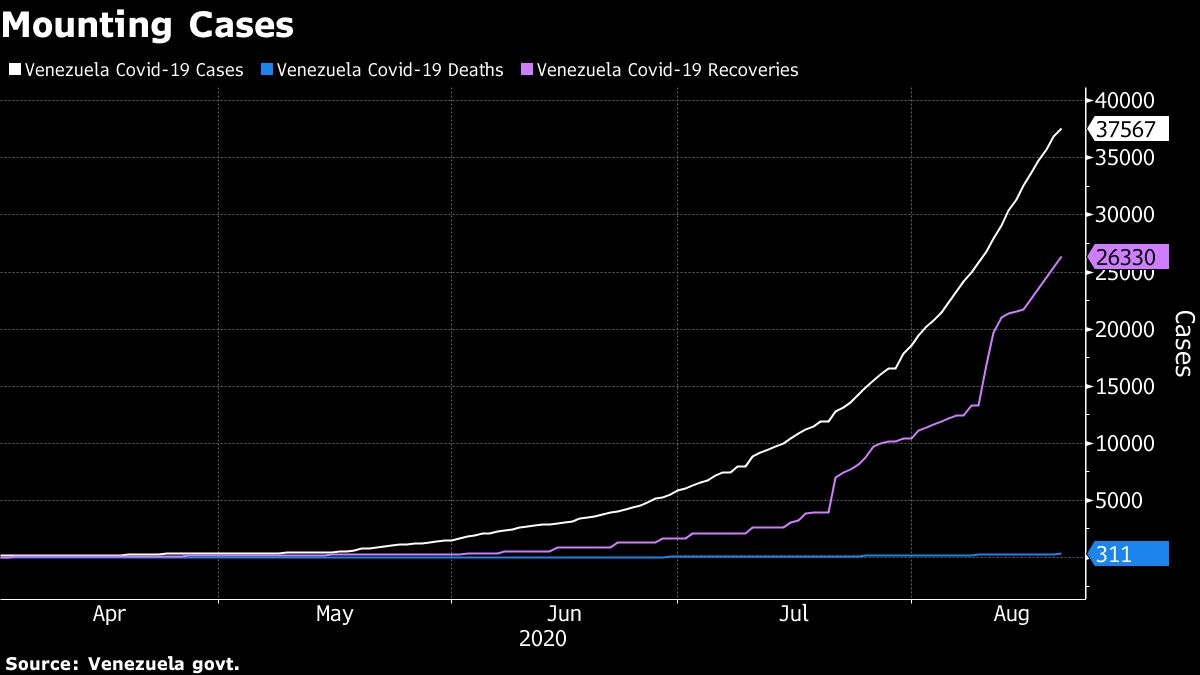 The government has also used public strong-arm tactics to send a message. It’s not uncommon to see people forced to sit in city squares in the sun or gathering trash or doing push-ups under the watch of soldiers. They have all been accused of violating mask or quarantine rules. In the eastern state of Bolivar, there is a so-called Coronabus where violators ride around and listen to police lectures on rule following.

Fearful of mandatory isolation, some Venezuelans with symptoms are turning to a black market to avoid any state involvement. A private physician in Caracas, who asked not to be identified for fear of reprisals, said he charges patients US$30 for rapid tests he bought privately.

It’s been more than a month since Venezuela received 40,000 molecular tests--the most reliable -- from Turkey. About 800,000 quick tests came from China a week earlier. Last week, on a short visit to Caracas, Turkey’s Minister of Foreign Affairs Mevlut Cavusoglu said he brought “a symbolic number of rapid tests.” None others have been reported.

Anayel Miquilena, a 31-year-old surgeon in Zulia state near the Colombian border, spent 36 days in forced isolation after being exposed to the virus at the hospital. Some days, she says, she wasn’t fed until 6:30 p.m. and she lost eleven pounds. Constant power outages meant suffering in the sweltering heat.

After she was discharged, her sister who lived next door tested positive.

“It was horrifying. I begged the infectologist not to take her,” Miquilena said. “They didn’t at the end. I think they forgot about her.”

Some medical professionals have been even less fortunate. Dr. Jaime Lorenzo, director of the nonprofit group Medicos Unidos, said at a press conference last week that the government has detained in recent months 13 members of the profession. One remains in prison.