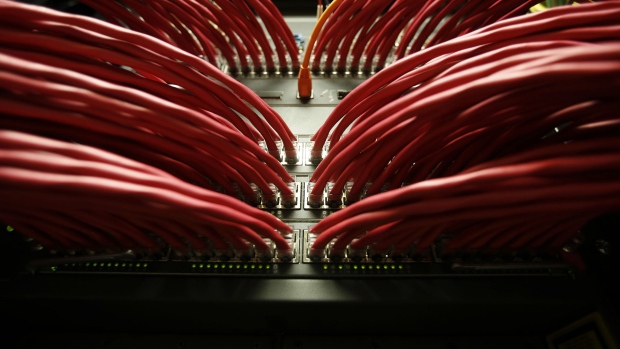 Rows of colored high end data cables are seen feeding into computer servers inside a comms room at a office in London, U.K., on Tuesday, Dec. 23, 2014. Vodafone Group Plc will ask telecommunications regulator Ofcom to guarantee that U.K. wireless carriers, which rely on BT's fiber network to transmit voice and data traffic across the country, are treated fairly when BT sets prices and connects their broadcasting towers. , Bloomberg via Getty Images

(Bloomberg) -- Cox Communications Inc. is in advanced talks to buy the enterprise business of Segra, the U.S. fiber provider owned by private equity firm EQT AB, according to people familiar with the matter.

A deal, which would boost Cox’s commercial division, could be valued at more than $3 billion, including debt, the people said, asking not to be identified because the matter is private.

A transaction could be announced as soon as this week, though talks could still fall apart and end without an agreement, the people said.

While Segra, based in Charlotte, North Carolina, is selling the division catering to business customers, it plans to retain its residential business, the people added.

Representatives for EQT, Segra and Cox declined to comment.

Atlanta-based Cox is the third-largest U.S. cable provider and the biggest division of privately held Cox Enterprises Inc., according to its website. Family-controlled Cox Enterprises was founded in 1898 by Ohio Governor James M. Cox. It generates $20 billion in annual revenue, according to its website, and also owns brands Kelley Blue Book and Autotrader.

Segra is one of the largest independent fiber network companies in the Eastern U.S., according to its website. Stockholm-based EQT formed Segra in 2019, merging Lumos Networks and Spirit Communications to form the re-branded company, Segra’s website shows.

EQT has invested in several digital infrastructure companies, including Zayo and EdgeConneX in the U.S.