An investor group including the family behind the Lego empire agreed to buy Merlin Entertainments Plc, the operator of Madame Tussauds wax museums, for about 4.8 billion pounds (US$6.1 billion).

Merlin investors would receive 455 pence per share, a premium of 15 per cent over the closing price Thursday. The deal, which continues a run of major private equity investments in Europe, is also backed by Blackstone Group LP and Canadian pension fund CPPIB.

Shares of Merlin, which also owns Legoland theme parks, surged as much as 14 per cent to trade just below the offer price at 451 pence in London on Friday.

Investors had pushed the company to consider a sale, saying it would be worth more in private hands. The bid is one of several recently in which buyout groups have moved to retake control of a company they previously owned, with targets getting scarcer and cheap financing readily available.

ValueAct Capital, which also lobbied for change at Britain’s Rolls-Royce Holdings Plc, said last month in an open letter to Merlin’s board that it needs to spend more on new hotels and Legoland parks and that’s hard to do as a public company. The activist investor, which rarely comments publicly on its investments, has accepted this offer. 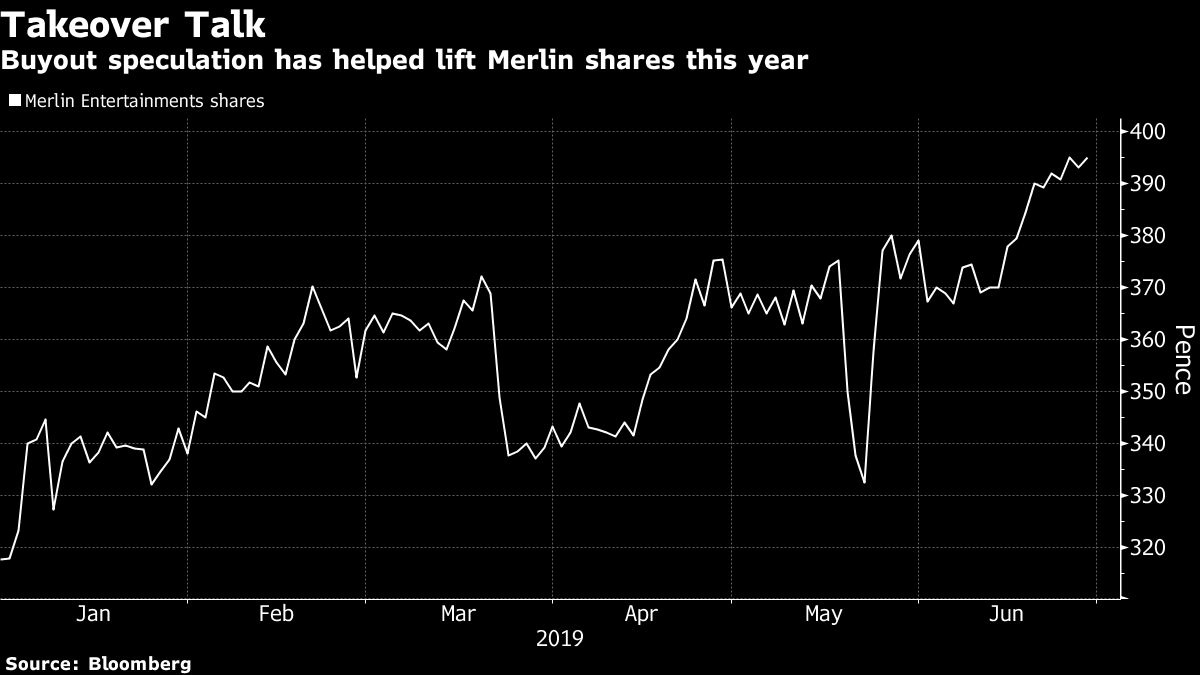 The Merlin bid is 37 per cent higher than the closing price on the day before ValueAct’s letter. It values the company at about 12 times Merlin’s 2018 underlying earnings before interest, taxes, depreciation and amortization.

“We regard this as a very attractive offer,” Merlin Chairman John Sunderland said in a phone interview. He said the average premium in the industry over the past decade is about 9 times Ebitda.

The bidders made four unsolicited approaches, the first of which was in May before ValueAct’s letter, Sunderland said.

Merlin Entertainments has had a number of setbacks in recent years, including a 5 million-pound fine following a 2015 accident at its Alton Towers theme park in the U.K. that injured customers on one of its rides, while the Brexit vote a year later hampered its growth potential. A Legoland being built in Goshen, New York, has also suffered from regulatory and construction delays.

In addition to operating Legoland and Madame Tussauds, the company oversees attractions such as Peppa Pig World of Play and the Coca-Cola London Eye. The company also plans another Legoland in South Korea and is looking for sites in China, where it would like to run three by 2030, Chairman Sunderland said.

Private-equity buyouts targeting European companies and announced this year have totaled US$43.4 billion, according to data compiled by Bloomberg. Activity has accelerated with recent transactions like KKR & Co.’s move to buy out minority shareholders in German publisher Axel Springer SE.

The private equity industry -- including real estate, debt and venture funds -- is sitting on about US$1.4 trillion in unspent cash as institutional investors pour client money into funds seeking returns, according to data compiled by Bloomberg.

Takeover speculation has helped propel Merlin’s stock in recent months. Shares of the Dorset, England-based company were up 24 per cent this year through Thursday’s close.

Blackstone led an investor group including Denmark’s Kirk Kristiansen family that previously owned Merlin for eight years prior to a 2013 initial public offering. The family, via investment vehicle Kirkbi, still owns a stake of almost 30 per cent and would increase that to 50 per cent via the buyout.

“The backing of an anchor shareholder, Kirkbi, would seem to us to limit the chance of a successful counter-bid,” Morgan Stanley analysts said in a note.