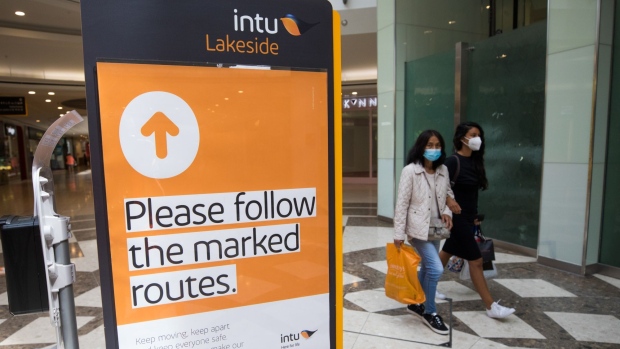 Shoppers pass a sign indicating the direction of walking around the Lakeside shopping centre, operated by Intu Properties Plc, in Thurrock, U.K., on Friday, June 19, 2020. Bloomberg

Talks to rescue U.K. shopping mall owner Intu Properties Plc collapsed after lenders including Canada Pension Plan Investment Board balked at a request to grant a moratorium on debt payments until the end of next year.

Intu, which owns nine of the U.K’s top 20 shopping centres, fell into administration on Friday after failing to reach a deal with its creditors.

CPPIB, which has loans secured against Intu’s Trafford mall in Manchester, rejected a request to extend loans until the end of 2021, according to people familiar with the matter, who asked not to be named because it’s private. Lenders behind debt backed by Intu subsidiaries Merry Hill and SGS also pushed back against the length of the extension, the people said.

“The company and its creditors across the capital structure have not been able to reach an agreement on the terms of a debt standstill,” CPPIB said in an emailed statement.

“In respect of our specific, ring-fenced financing of the Trafford Centre, we will work with the administrator of Intu Group to support the long term future of the Trafford Centre and also ensure that we are fulfilling our fiduciary duties to act in the best interest of the 20 million CPP contributors and beneficiaries.”

Intu was already reeling from plunging U.K. store rents and collapsing values before the coronavirus outbreak forced most of its tenants to close. The lockdown contributed as retailers withheld rent and the pandemic shut off rescue options including a capital raise as it sought to reduce its 4.5 billion-pound ($5.6 billion) debt pile.

After obtaining an agreement to waive terms governing its revolving facility until June 26, the company tried to buy additional time by asking creditors to postpone covenant testing, debt repayment and maturity payments for loans coming due before the end of 2021.

The administration paves the way for the potential sale of some of the U.K.’s most-visited malls, including the Trafford Centre near Manchester and Lakeside in Essex. It also threatens the jobs of about 2,500 Intu staff and of the thousands more who work in the stores inside its malls.