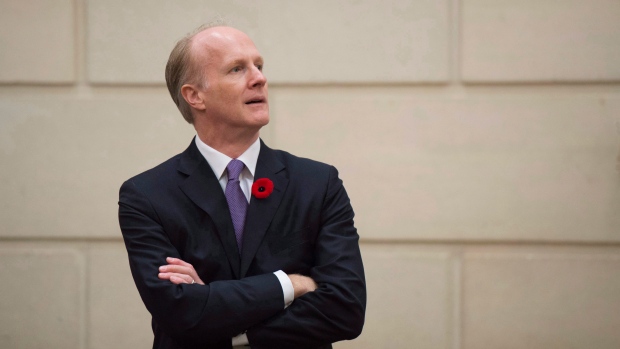 Canada Pension Plan Investment Board President and Chief Executive Officer Mark Machin waits to appear at the Standing Committee on Finance on Parliament Hill, in Ottawa on Tuesday, November 1, 2016. , The Canadian Press/Adrian Wyld

The Canada Pension Plan Investment Board (CPPIB) said it delivered only a marginal improvement in investment returns in its third quarter, impacted by declines in fixed income markets.

Canada's biggest public pension plan said its portfolio delivered a gross investment return of 0.64 per cent for the quarter, or 0.56 per cent net of all cost. It ended the quarter to Dec. 31 with net assets of $298 billion, compared with $301 billion at the end of the previous quarter.

Machin said that, coupled with the Canadian dollar strengthening against most major currencies except for the U.S. dollar, partially offset gains from its investments in public equity markets.

The CPPIB, which invests on behalf of 19 million Canadians, has diversified internationally and into alternative assets like infrastructure and real estate to offset the impact of record low yields on government bonds and volatile equity markets.

However, the majority of its investments remain in public equity and fixed income markets.