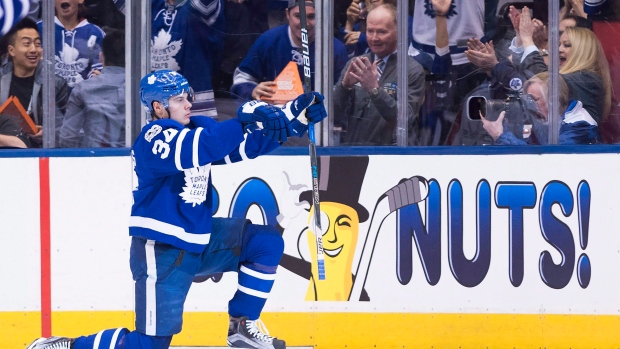 Toronto Maple Leafs centre Auston Matthews (34) celebrates his goal against the Washington Capitals during first period NHL hockey round one playoff action in Toronto on Monday, April 17, 2017. , The Canadian Press

TORONTO -- Canada Pension Plan Investment Board is preparing to buy a 39 per cent stake in Sportradar, a global company that distributes data from the National Hockey League and other professional sports for betting purposes.

Toronto-based CPPIB has teamed up with equity firm TCV of Menlo Park, Calif., but they haven't disclosed how much their Sportradar stake will cost.

However, based on Sportradar's estimated value of US$2.4 billion, including equity and debt owed, CPPIB's share of the company would be worth about $936 million.

Sportradar founder and CEO Carsten Koerl will retain his ownership share and continue to drive the company's future development and growth.

"Having two new investors with a strong North American footprint is ideal given our increasing focus and expanding operations in the U.S., as the sports industry evolves to meet the expectations of today's sports fans," Koerl said in a statement.

Among other things, Sportradar works with the NHL and National Basketball Association to distribute data and with Major League Baseball to distribute audio and video content to sport betting operators.

It is also a partner with the National Football League and the NASCAR auto racing circuit as well as two major soccer bodies, FIFA and UEFA.

Ryan Selwood, head of direct private equity investment at CPPIB, said Koerl was very actively involved in choosing Sportradar's new partners "and we feel quite fortunate that he chose CPPIB and TCV."

Sportradar is the only company that's currently working with U.S. sports leagues for official data for betting purposes, he said in a phone interview from New York City.

"So the fact that they are able to meet the standards of the major leagues positions them very well to succeed as regulatory environments evolve in the United States," Selwood added.

In addition, Sportradar has been very quick to evolve its products to meet new market niches through a variety of platforms, he said.

For example, Sportradar and The Globe and Mail are collaborating on The Forecheck, which forecasts individual NHL game outcomes and playoff probabilities based on statistics that are loaded into the predictor after each game.

"So when (newly acquired star centre) John Tavares scores his first goal for the Toronto Maple Leafs, it's likely that a number of Canadians will be engaging on their mobile devices with that data and some assessment of how that impacts the likely outcome of the game,"  Selwood said.

Selwood said TCV will invest in Sportradar alongside CPPIB and provide strategic advice based on its experience in technology investments. He added Sportradar has no plans for an initial public offering at this time.

"We actually think our investment, as two long-term investment partners, will position it well from a capital and funding perspective. . . . So there's no current plan to IPO any time soon," Selwood said.

Founded in 1995, TCV provides capital to growth-stage technology companies. Its current active investments included AirBnB, eHarmony, Electronic Arts, and Spotify. It's also a past investor in Facebook, GoDaddy and LinkedIn.