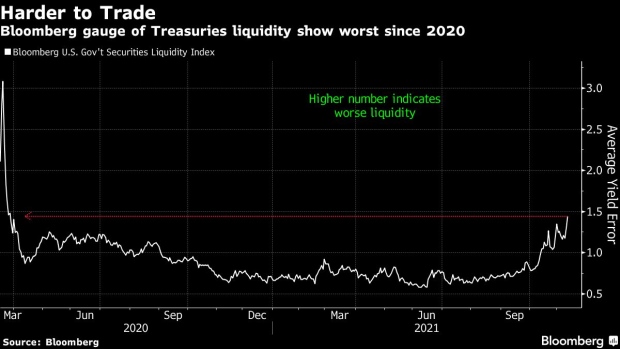 (Bloomberg) -- Warning signs are starting to flash at the regulators of the $22 trillion U.S. Treasury market, which is being whipsawed by volatility just as the Federal Reserve begins pulling back from its $80 billion-a-month buying spree.

Sparked by a report of surging inflation that led traders to move up the timetable for Fed’s first rate increase, the yield on two-year Treasury notes rose nearly 10 basis points Wednesday, its biggest move since March 2020. It capped a period of extraordinary volatility that led to the rockiest 30-year bond auction in a decade and drove a gauge of market liquidity to its most troubled level since the meltdown soon after Covid-19 hit the U.S.

The fissures are appearing just as the market’s overseers are set to convene virtually Wednesday for an annual event that’s been held since 2015, a year after a 12-minute “flash rally” when yields crashed and rebounded with no apparent trigger. That’s not supposed to happen in the world’s biggest debt market. The agenda is to consider “proposals to improve overall market functioning and resilience.”

The urgency may grow by then. The Fed, which has been steadily buying Treasuries since the onset of the pandemic nearly froze trading, is implementing plans to start scaling back its buying by $10 billion a month. And while regulators are meeting, the Treasury Department will hold its monthly auction of 20-year bonds, providing a test of whether this week’s 30-year sale was an anomaly or a sign that the market’s ability to function smoothly may be imperiled as the central bank withdrawals its support.

“The current structure enables the market to function well when volumes are running around average levels,” said Peter Tchir, head of macro strategy at Academy Securities. “But it leads to these periods of large and aggressive moves that seem inexplicable relative to the data. It also makes it hard for asset managers to manage their risk.”

That was on display this week, when Bloomberg’s U.S. Government Securities Liquidity Index -- which measures how much yields diverge from a fair-value model -- showed conditions were the worst since March 2020.

Anomalies in the pricing of Treasuries have broad effects because their yields are used to value more than $50 trillion in assets around the globe. Within the Treasury market, trading of notes and bonds issued in past years -- known as off-the-run securities -- is difficult under normal circumstances and even more cumbersome when liquidity ebbs, Tchir said.

The Treasury’s undersecretary for domestic finance, Nellie Liang, as well as its deputy assistant secretary, Brian Smith, will be part of the conference. Officials from the U.S. central bank include New York Fed President John Williams and Lorie Logan, manager of the System Open Market Account at the reserve bank. Top officials from the Commodity Futures Trading Commission and the Securities and Exchange Commission will also take part in the webcast event.

The recent swings in the Treasury market reflect the broad uncertainty about the direction of the economy and monetary policy amid surging prices, labor shortages and yields that are holding well below the rate of inflation.

The Treasury’s sale of $25 billion in new 30-year bonds Wednesday drew a yield more than five basis points higher than the yield in pre-auction trading just before the bidding deadline, a sign of weak demand. The so-called tail was the worst for a bond auction since August 2011.

“A five-basis-point auction tail is a clear sign of illiquidity,” said Michael Cloherty, head of U.S. rates strategy at UBS Group AG. “For the past two weeks the market’s been extraordinarily erratic and is having difficulty handling large transfers of risk.”

U.S. regulators have taken some action since the mayhem of March 2020 forced the Fed to jump in and buy billions of dollars of debt each day to keep the market working.

The recent bout of volatility surprised some investors, who expected the market to steady after Fed Chair Jerome Powell this month indicated he was in no rush to raise rates. Instead, the ICE BofA MOVE Index, a gauge that measures implied future swings in Treasury yields embedded in option prices, is now near the highest since around April 2020.

“We are in a transitional period now, not just with monetary policy but also given there are a lot of uncertainties out there, including where fiscal policy is headed and with geopolitics,” said Jerome Schneider, head of short-term portfolio management and funding at Pacific Investment Management Co., which manages about $2.2 trillion in assets.

“People have become very lethargic in terms of thinking about how liquidity is distributed through the global financial system because monetary policy has been incredibly easy,” he said. “That is changing slightly now.”