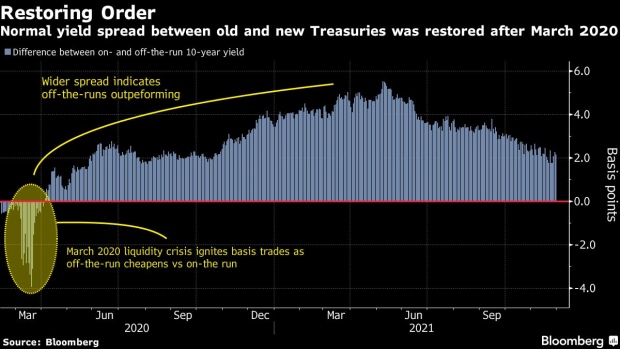 (Bloomberg) -- Buying and selling large quantities of U.S. government debt without substantially moving the market is about the hardest it’s been since the pandemic sent markets reeling in March 2020. Volatility has jumped, failed trades have increased -- and Wall Street analysts warn that the Federal Reserve’s exit from bond-buying is set to make matters worse.

When markets seized up last year, liquidity in most Treasuries vanished, forcing the Fed to embark on massive asset purchases and other measures to avert a full meltdown. Now, the U.S. central bank is scaling back that buying, which has targeted the least-liquid Treasuries, and is poised to quicken the wind-down. At the same time, new government borrowing is ebbing, with the combination setting the stage for more fireworks.

“Treasury is cutting the amount of the most liquid Treasuries and the Fed is stopping its buying of the least liquid,” said John Briggs, global head of desk strategy at NatWest Markets. “And what we’ve seen overall in the Treasury market is that liquidity is more of a mirage. The Fed still is basically the only real balance sheet in town.”

The past month’s bout of heightened volatility in Treasuries shows the stakes all too clearly. The crosscurrents of persistently high inflation and the pandemic’s refusal to go away have caused large daily swings in yield, indicative of poor liquidity, stirring memories of previous pain.

Treasury-market liquidity has been under the microscope since the 2014 “flash rally” that illustrated just how suddenly the willingness to make markets can vanish. That’s prompted some, including Bank of America Corp., to argue that the market has outgrown its ability to transfer risk cleanly, necessitating an official body to step in as dealer of last resort.

Against that backdrop, the Fed curtailing its buying of Treasuries is causing palpitations. The central bank buys mainly older notes and bonds, “off-the-runs” that make up 95% of the $22 trillion market but are less frequently traded. Meanwhile the shrinking auction sizes mean a smaller pool of the newest, “on-the-run” securities that everyone wants, and serve as benchmarks for most other bonds globally.

The combination “is a mechanism for more bouts of illiquidity and volatility,” said Praveen Korapaty, head of interest-rate strategy at Goldman Sachs Group Inc. “If the Fed is not there, others in the market will be less willing to provide liquidity in off-the-run securities. And at the same time the Treasury is cutting on-the-run issuance.”

Those reductions began last month. The net supply of notes and bonds --  when Fed purchases are accounted for -- is expected to fall 25% next year to $1.425 trillion, according to JPMorgan Chase & Co. calculations. And Fed Chair Jerome Powell upped the ante on Tuesday, hinting that the central bank could announce a speedier end to tapering as soon as this month.

The Fed’s Treasury holdings have more than doubled since the end of 2019 to $5.6 trillion as a result of the purchases that began in March 2020 -- first to restore liquidity to the market, which evaporated in the early stages of the pandemic when investors fled to cash, and then to support the economy.

“Off-the-runs have been outperforming on-the-runs over the last year and half given the Fed’s the biggest player in the game and they are only buying off-the-runs,” said Jay Barry, head of U.S. government-bond strategy at JPMorgan. Going forward, “there’s going to be a need for someone else to finance and own off-the-runs, and that is probably going to be the hedge-fund community or real end-users.”

For some traders, that’s a welcome development. Fed buying tended to steamroll opportunities to profit from relative-value trading -- taking positions in bonds that appear temporarily cheap or rich.

The flip side is that dealers may shy away from making markets in off-the-run Treasuries because they can’t count on being able to sell them to the Fed, Goldman’s Korapaty said.

At at the annual U.S. Treasury market conference last month some participants argued that easing regulatory constraints which seek to contain bank leverage might help dealers free up more of their balance sheets in order to intermediate in the Treasury market.

Unless regulators shift bank supplementary leverage ratio (SLR) rules to exclude certain assets like bank reserves, off-the-run Treasury security liquidity may remain challenged. As the Fed steps away from the market, dealers will have to perform traditional intermediation functions with a market much larger than balance sheets can handle. Though we don’t think the market will seize up as it did in March 2020, two or three bouts of less-liquid markets may cause yields to move considerably more than with typical daily volatility.

Difficulty in trading global benchmark interest rates creates additional headaches at a time when Treasuries are on track for their first annual loss since 2013. The Treasury market as a whole was down around 1.4% for the year as of Dec. 3, according to a Bloomberg index. Inflation risks have driven up expectations for Fed interest-rate increases and hurt securities around the five-year part of the curve in particular. And with liquidity at risk of deteriorating further, there could well be more volatility ahead for the world’s biggest bond market.