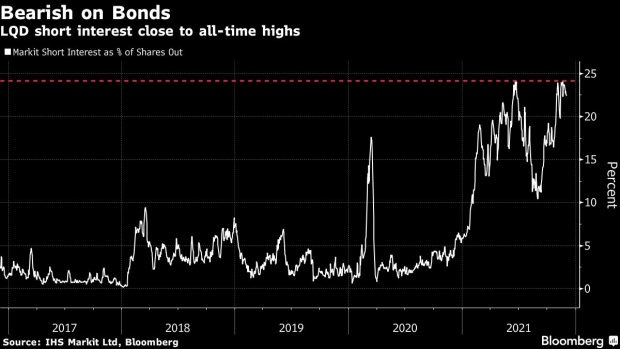 (Bloomberg) -- As cracks appear in U.S. equity markets, fixed-income ETFs are flashing warnings signs about what comes next.

A record $2.5 billion poured into the iShares 20+ Year Treasury Bond ETF (ticker TLT) in the week through Thursday as investors sought shelter in government debt amid growing fears about the omicron variant. The bid for Treasuries comes as sentiment on corporate debt sours: short interest on the $38 billion iShares iBoxx $ Investment Grade Corporate Bond ETF (LQD) is near an all-time high, while traders pulled money from the iShares iBoxx High Yield Corporate Bond ETF (HYG) for a third week.

It’s a worrisome cross-asset signal of additional turbulence ahead as equity markets quake under the combined weight of coronavirus concerns and a surprisingly hawkish tilt from the Federal Reserve’s Jerome Powell. The central bank chief abandoned his signature “transitory” language around inflation, and suggested that officials may speed up the pace of tapering the bond buying program. The prospect that the Fed may turn off the stimulus taps earlier than expected sent a shudder through corporate credit and richly valued technology stocks, which have thrived in an era of ultra-low interest rates.

“There is some caution starting to seep in on the part of investors towards credit, given the tight spreads, omicron concerns, and the shift in the Fed’s focus from the labor market to inflation,” said Sameer Samana, Wells Fargo Investment Institute senior global market strategist. In the stock market, “You should see defensives perk up -- it’s no surprise staples and utilities are outperforming.”

TLT looked set for more inflows on Friday after the fund jumped 1.2% as equities slumped. The S&P 500 fell 0.8% Friday to close lower for a second straight week, dragged down by a selloff in tech. Meanwhile, air escaped from the most speculative corners of the equity market, with the ARK Innovation ETF and recently public companies sinking.

Additionally, a Goldman Sachs Group Inc. basket of non-profitable tech firms is down 14% over the past five days for its worst week since March 2020 as the Cboe Volatility Index climbed to the highest since January.

Bond fund flows reflect the shifting risk appetite. Investors pulled nearly $4 billion from U.S. investment-grade bond funds in the week ending Dec. 1, the biggest withdrawal since April 2020, according to Refinitiv Lipper. Junk funds also bled roughly $2.6 billion. And blue-chip spreads are now wider on the year after narrowing to the lowest since 2007 over the summer.

Whether omicron fears turn out to be overblown or warranted, corporate credit is still in the crosshairs, according to Peter Chatwell, head of multi-asset strategy at Mizuho International. Easing worries would pressure long-term Treasuries yields higher, dragging down credit, while a worst-case scenario that leads to further lockdowns would erode corporate revenues -- also hitting corporate debt.

“The trade here is to sell LQD and maybe sit on the cash for a while,” Chatwell said.

After some of the turbulence is worked through, though, Samana sees equities as the ultimate destination for portfolio managers, given that rates remain historically low.

“We think a lot of this consternation will be temporary -- a mini tantrum, if you will,” Samana said. “Eventually equities will again be the place to be, given the continued low level of yields.”