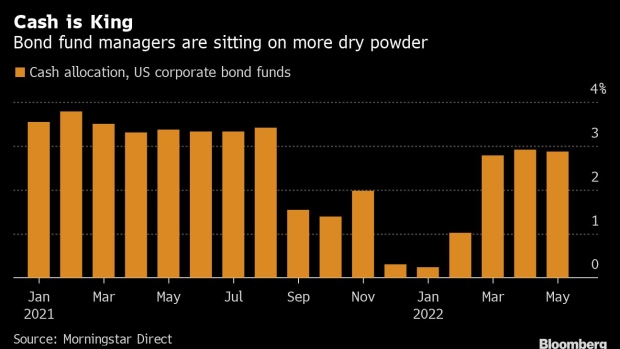 (Bloomberg) -- June has been the worst month for US corporate bonds since the start of the pandemic, by at least one measure, but investors like TCW Group Inc. and Voya Investment Management think it’s too soon to hunt for bargains.

Many credit investors are hoarding cash as the Federal Reserve tightens aggressively, having lifted rates by the most since 1994 this week to tame inflation. They’re hesitating to buy even after junk bonds have dropped 5.7% in June through Thursday, on track for their worst month since March 2020. Risk premiums on US high-grade corporate bonds are climbing toward their highest levels in about two years.

“We’re not looking to add outright at these levels,” said Travis King, head of US investment-grade corporates at Voya. The chance of a recession is rising, and current corporate debt prices don’t adequately reflect the risk, he said. His cash and Treasuries levels are 25% to 50% higher than normal.

More investors than usual seem to be similarly positioned. A Bank of America Corp. survey last month said that about 40% of money managers had above-normal cash levels in their high-grade portfolios -- the highest percentage in at least a decade. In a separate study, US corporate bond managers had nearly 3% of their portfolios in cash in May, near the highest levels since August 2021, according to preliminary data from Morningstar Inc. on mutual funds and exchange-traded funds.

If investors are waiting for bigger bargains to arrive, corporate bonds may struggle to rally in the near term. Barclays Plc strategists said this week that credit markets don’t appear to have sufficiently priced in the slowdown in consumer spending growth that seems to be on the horizon.

Risk premiums on the bonds will likely reach as wide as 1.5 percentage point by the end of the year, the Barclays strategists said, compared with 1.44 percentage point on Thursday. Average spreads below 1.50 percentage point now feel too low, Voya’s King said. Voya had about $254 billion of assets under management as of the end of March.

Money managers’ high cash levels imply that money managers have been skeptical of the gains that corporate bonds notched in late May. There’s other evidence of that skepticism, JPMorgan Chase & Co. strategists said in a June 10 note. For one thing, investors have been withdrawing money from high-grade funds-- there have been 12 weeks of outflows, the longest such streak on record, Refinitiv Lipper data show. Also, bonds in the lowest tier of investment-grade hadn’t rallied enough through last week to indicate fears are disappearing, JPMorgan strategists said.

“We are closer to maximum cash than normal,” said Bill Zox, a high-yield portfolio manager at Brandywine Global Investment Management. For that to change, “we’ve got to be convinced that the flows have stabilized.”

Markets have been moving sharply in recent days. These kinds of moves can create opportunities for investors willing to take risk.

Steve Kane, co-chief investment officer of fixed income at TCW, said he’s been adding slightly to his high-grade corporate bond holdings, but isn’t adding in high yield, where more weakening is likely. He’s keeping extra dry powder on hand to be able to pounce on any “outlier-type events.”

There are no new US investment-grade bond sales on the calendar on Friday, representing the first time this year where no US high-grade bonds were sold for the entire week.

Primary markets are set for a third consecutive day without sales, which would bring the total for the year to 24, as credit conditions remain pressured by economic concerns. Meanwhile, issuance of covered bonds -- one of the few resilient areas of sales -- may begin to slow as the European Central Bank ends its net asset purchases.

The Bank of Japan ran contrary to its US, UK and Swiss counterparts by holding firm with rock-bottom interest rates.