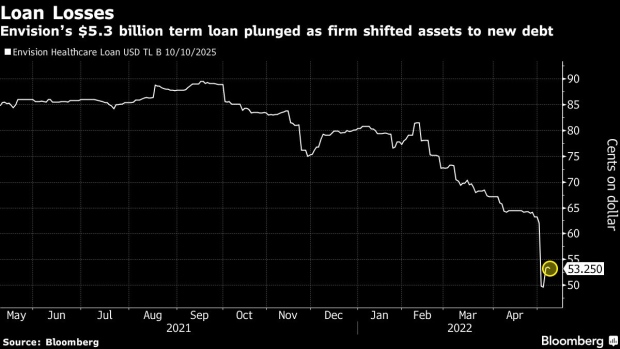 The list of controversial debt deals that are synonymous with creditors battling creditors is growing, and market watchers say it’s poised to get even longer.

Envision became the latest firm to stir up outrage after the KKR & Co.-owned physician-staffing company secured a $1 billion financial lifeline by shifting its most valuable assets to a new loan, tanking the value of its older debt in the process.

The transaction signals that even with supply-chain disruptions, rising inflation and monetary-policy tightening fueling a fresh wave of opportunities, firms in the cutthroat business of distressed-debt investing aren’t scaling back efforts to cash in at their rivals’ expense.

In fact, back-room deals by aggressive fund managers looking to exploit weak creditor protections are already on the rise, with desperate private equity sponsors and lenders grasping for value in flagging investments as global sentiment sours and volatility surges.

“I don’t think growth in distressed-debt supply will decrease tension -- I think it’s only going to increase it,” said Matt Toms, chief investment officer of fixed-income at Voya Investment Management. “In a rising interest-rate environment, not only does the cost of debt go up, the patience of capital goes down.”

The conflicts are in part a product of over a decade of near rock-bottom interest-rates and quantitative easing that spurred a surge in demand for higher-yielding assets. That, in turn, helped risky companies sell debt with fewer lender safeguards.

Late last month, Envision, struggling with a heavy debt load and pandemic-hit revenues, secured a financing package from a group of largely third-party investors including Centerbridge Partners, Angelo Gordon, HPS Investment Partners and Pacific Investment Management Co., according to people with knowledge of the transaction.

Some are already working with legal advisers ahead of potential litigation, said the people, who asked not to be identified because they’re not authorized to speak publicly.

The clash comes after Envision decided to pass on the existing creditors’ own financing plan, which would have instead given them claim to AmSurg, the people said.

Envision rejected that proposal -- which itself would have “primed,” or moved back in line for repayment, any current creditors outside the group -- in favor of the third-party deal, which shifted collateral in a manner that the company’s owners and lawyers considered more sound, the people said.

The transaction has similarities to perhaps the most notorious creditor conflict in recent memory, when five years ago J. Crew Group moved intellectual property to a Cayman Islands entity out of reach of its existing loan holders, causing the value of the debt to plunge.

That deal, widely considered to be the first in a new surge of contentious asset-transfer agreements, was followed by a broad corporate restructuring, and ultimately wasn’t enough to save J. Crew from bankruptcy.

Just last month, a group of funds including Silver Point Capital and Pimco teamed up to lend aerospace supplier Incora $250 million backed by collateral that was previously pledged to existing creditors.

Some investors have come out publicly in defense of the aggressive deals.

“To provide a company with money to work through a tough situation, you need to be rewarded,” said Glenn August, the chief executive officer of Oak Hill Advisors, said at the recent Milken Institute Global Conference. “The documents in some situations allow for that. When you make mistakes, whether it’s with a bad company or bad documents, you suffer the consequences.”

Still, others are critical of the practice.

“Going out and pounding each other silly is not our way,” SVPGlobal Chief Investment Officer Victor Khosla said at the conference. “All this document gamesmanship and the platoons of lawyers, we have very little time for it.”

The string of aggressive priming or collateral stripping deals in recent years has featured repeat appearances from some of the market’s heaviest hitters. Pimco helped lead Incora’s priming transaction less than a month before it engaged in the Envision deal.

And in a world where a limited roster of funds partake in most major transactions, several have found themselves alternately outraged by priming and asset-transfer maneuvers, and participating in them.

Angelo Gordon, which was part of a hedge fund cohort that sued Serta in 2020 after it struck a deal to raise fresh cash and push existing creditors down the repayment line, is helping lead Envision’s new financing this go around.

“A greater default environment is going to create greater distressed investment opportunities, but it’s also going to create a greater number of these opportunities for companies that are looking for creative ways to raise capital,” said Sanjeev Khemlani, senior managing director and leader of the senior lender practice at FTI Consulting. “It seems this trend will only get worse.”