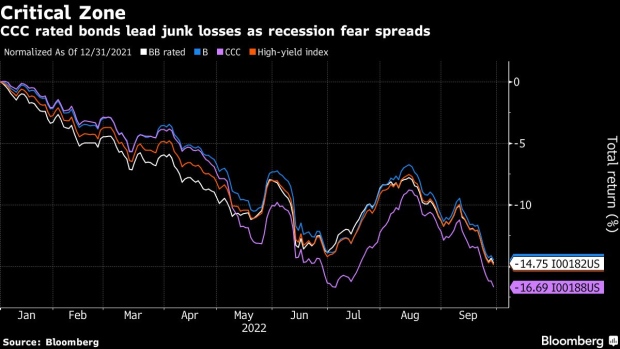 (Bloomberg) -- Credit markets are starting to buckle under pressure from soaring yields and fund outflows, leaving strategists fearing a rupture as the economy slows.

Banks this week had to pull a $4 billion leveraged buyout financing, while investors pushed back on a risky bankruptcy exit deal and buyers of repacked loans went on strike. But the pain was not confined to junk -- investment-grade debt funds saw one of the biggest cash withdrawals ever and spreads flared to the widest since 2020, following the worst third quarter returns since 2008.

“The market is dislocated and financial stability is at risk,” said Tracy Chen, portfolio manager at Brandywine Global Investment. “Investors are going to test central bank resolve,” she said in a phone interview.

In a sign of just how dire things are starting to become, a measure of credit stress tracked by Bank of America Corp. jumped to a “borderline critical zone” this week. “Credit market dysfunction starts beyond this point,” strategists Oleg Melentyev and Eric Yu wrote in a note Friday entitled “This Is How It Breaks.”

More pressure is expected as the Federal Reserve continues to tighten the screws on financial markets, raising funding costs at a time when earnings are pressured by a slowing economy.

The riskiest bonds, rated CCC, are leading high-yield losses. The average CCC rated debt is down almost 17% this year, worse than the 15% drop for junk overall.

“You are really starting to see CCC pricing in concerns for a recession,” said Manuel Hayes, senior portfolio manager at Insight Investment. Hayes is buying bonds that are better positioned to ride out a downturn, calling BBB rated bonds, the lowest tier of investment grade, the “sweet spot.”

A general move away from debt that’s most exposed to an economic downturn has widened the gap between risk premiums for BB and B rated debt to the highest since 2016. At the same time, the average high-grade spread hit 164 basis points Thursday, the widest in more than two years.

And the pain is spreading to all corners of credit, including structured products. Collateralized loan obligation prices are dropping as Wall Street banks retreat from buying the securities, pressured by regulators. That will likely dent issuance of CLOs, the biggest buyers of leveraged loans. The average price for the floating-rate loans dropped to about 92 cents on the dollar and investors don’t see calm returning to markets anytime soon.

A key spread on mortgage-backed securities meanwhile hit a two-year high after the Fed stepped back from the market.

“A recession is a forgone conclusion, if we aren’t tipping into one already,” said Scott Kimball, managing director at Loop Capital Asset Management. “The question is the duration and severity and none of that improved during the quarter.”

Sales of corporate bonds in Europe slumped to the lowest for any comparable period since at least 2014, while the usually booming month of September underwhelmed with the worst sales since the same year, according to data compiled by Bloomberg. As funding costs are driven up, it’s creating a bleak picture for the region’s firms.

Globally, at least 10 bond deals were either delayed or canceled in September, up from just the one in August, according to data compiled by Bloomberg. That’s the highest since June, following a rare period of stability in the summer.

US junk bonds are headed for worst year-to-date losses on record as the Federal Reserve maintains a hawkish stance to tame inflation.

The region’s primary bond market missed expectations for issuance, at just over €15 billion ($14.7 billion), with Friday being the 39th day without sales this year.

The tiny leveraged loan market is outshining the US and Europe, with banks in the region based outside Japan enjoying one of their best years, posting a 40% year-over-year increase in sales by September, according to data compiled by Bloomberg.