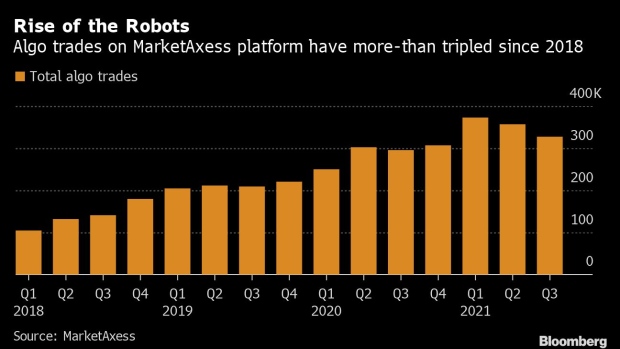 (Bloomberg) -- Credit-trading robots, having already taken over much of investment-grade bond pricing and trading, are getting sophisticated enough to move into less-liquid corners of debt markets.

JPMorgan Chase & Co.’s algos now trade several thousand different bonds in the U.S. and the Europe, Middle East and Africa region, up from around 250 at the beginning of 2020, the bank said. At Barclays Plc, algorithms now price more than half of quote requests globally.

The pandemic has sharpened these algorithms, as big market swings helped developers better understand how securities perform in stressed markets. Now price movements have settled down, making it easier for automated trading to get involved in transactions in areas including emerging markets.

“The Covid crisis gave the industry a whole set of new data on how markets react in a crisis,” said Kevin McPartland, head of research for market structure at Coalition Greenwich. “That’s very helpful for the folks writing the algorithms, to understand what might happen in the worst case.”

The greater automation is allowing banks to process more trades and enabling human traders to focus on larger, more complicated transactions. Trading volume in the U.S. corporate bond market has grown 39% over the last five years as companies have gone on a borrowing binge, while most banks have kept the number of traders they employ stable or even cut headcount a bit.

“One of the founding principles when we went and asked the bank to invest in algos was, ‘We think we can make our people 10 to 20% more productive by building this technology,” said Drew Mogavero, deputy head of credit products at Barclays. “When you’re not having to stare at a request-for-quotes screen and just punch numbers, you have more time to do those higher value-added things.”

Most algo trades now are responses to requests for quotes on electronic credit trading platforms like those operated by Tradeweb Markets Inc., MarketAxess Holdings Inc. and Trumid Financial. The platforms have seen explosive growth of automated trading, especially in high yield.

The share of automated trades for U.S. high yield at Tradeweb was 38.3% in the third quarter, up from just 5.1% three years ago, according to a company spokesperson. Algo trade responses on MarketAxess’s platform were up 17% in the third quarter compared to the same period in 2020.

“The algos are getting better,” said Richard Schiffman, head of open trading at MarketAxess, where banks can trade with clients and other parties. “It’s a steadily improving science that all these firms are performing.”

Bloomberg LP, the parent company of Bloomberg News, competes with MarketAxess and Tradeweb to offer fixed-income trading, data and information to the financial services industry.

For years, sell-side trading desks used algorithms to price and execute simple trades, such as transactions involving smaller-sized U.S. investment-grade bonds or heavily traded high-yield securities. Now banks can link their various credit businesses and figure out the best use for any bond that they end up buying, such as whether to package it into an exchange-traded fund or find a client to sell it to, based on risk tolerance and other factors.

And the growth of exchange-traded funds and portfolio trading is providing more buyers, more data points, and more opportunities for automation.

One reason algos are increasingly needed to assist human traders: The growing size of the corporate bond markets. The total outstanding value of bonds in just the Bloomberg U.S. Investment Grade Corporate Bond Index has grown from $4.3 trillion in 2015 to $6.2 trillion now.

“People sometimes think of the relationship between algorithmic and human market-makers as a zero-sum game, but we never have because credit markets continue to grow,” said Sanjay Jhamna, head of EMEA credit at JPMorgan. “The growing volume of tickets and number of issuers mean added pressure on traders to respond to more inquiries.”

Improving tech is allowing dealers to respond to a much higher rate of quote requests. Before algo development, many electronic quote requests for small traders or odd sizes were ignored by dealers, with human traders focused on executing more-profitable big trades.

At one large sell-side credit trading desk, as many as three-quarters of electronic quote requests went unanswered before the adoption of algo trading. Thanks to algos, that rate has been flipped and the bank is responding to about three-quarters of tickets, said a person with knowledge of the matter who asked not to be identified because the information is private.

Emerging markets are a major challenge for credit-trading bots now. Fragmented markets and a lack of transparency and data make developing markets much more difficult to trade via algos. But technology is developing fast.

“EM is coming into focus for greater efficiencies, and I think algos will start to play a bigger role,” said BofA’s Theisen. “I think of EM as more in the toddler phase versus U.S. investment grade, where the algos have grown into adolescence.”

Morgan Stanley is actively improving the capabilities of its high-yield algo and extending its tech into emerging markets credit, said Maryanne Richter, the bank’s head of credit electronic trading strategy.

“We are taking the underlying framework of the corporate bond algo and extending it to the different markets which are much less transparent, much less liquid, and much more idiosyncratic,” Richter said.

U.S. investment-grade bond sales will probably dry up on Friday, according to an informal survey of debt underwriters, after jumbo deals from AerCap and Goldman Sachs propelled weekly volume to over $50 billion.

Burger King France is may price a 855 million-euro three-part bond.

China’s junk dollar bonds are set for their best week in almost a decade after news that China Evergrande Group paid a bond coupon before this weekend’s deadline, adding to a broader rally for Asian corporate debt.