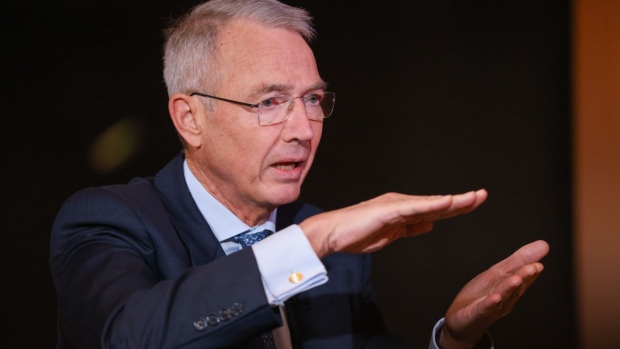 (Bloomberg) -- Credit Suisse Group AG Chairman Axel Lehmann said the main indicators of the bank’s financial stability were strong and that its level of liquidity is improving after declines in recent weeks.

The Zurich-based bank’s liquidity coverage ratio, which measures the quantity of easily-sold assets available to meet obligations, is currently at 140%, Lehmann said in an interview with Bloomberg Television’s Francine Lacqua on Friday.

Credit Suisse reported last week that the metric had dropped to between 120% and 130% on a spot basis, from a level of around 190% at the end of the third quarter. In October, outflows of assets and the subsequent use of liquidity buffers had caused the bank to fall below certain regulatory levels at some of its entities.

Credit Suisse saw 84 billion Swiss francs ($89.7 billion) of client asset withdrawals in the first few weeks of the fourth quarter amid persistent rumors about the bank’s stability. Credit spreads and the cost to insure the bank’s debt against default have surged to above 400 basis points, far above peers. The outflows have “basically stopped,” Lehmann said.

Yet the stock rebounded after Lehmann’s comments on Friday, helping to arrest the losing streak. It traded up as much as 6.73% to 2.86 Swiss francs in Zurich.

Lehmann also said that the bank’s leverage ratio, which measures capital against exposures, was now above 6%, and was one of the highest in the industry. Credit Suisse’s main regulatory capital ratio, CET1, dropped in the third quarter to 12.6% from 13.5% in the three months previous. The ongoing capital raise should strengthen that ratio to 14%, according to Bloomberg Intelligence.

“These are very strong prudential metrics. So that will calm the market,” Lehmann said.

“While the decline in the LCR towards 120%-130% range is not helpful, the ratio remains well above 100%, providing buffer,” JPMorgan & Co analysts wrote in a note on Dec.1. Credit Suisse “had indicated it continues to have access to central bank funding sources if required.”