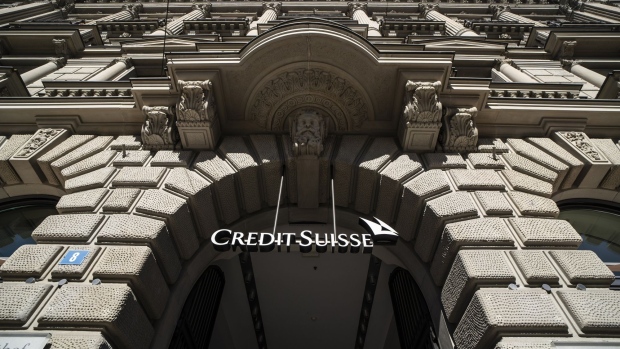 A sign hangs above an entrance to the Credit Suisse Group AG headquarters in Zurich, Switzerland, on Wednesday, Oct. 5, 2022. Credit Suisse has become a poaching ground for rivals in recent times, with the lender struggling to contain the fallout of a series of scandals and flagging performance. Photographer: Jose Cendon/Bloomberg , Bloomberg

(Bloomberg) -- Credit Suisse Group AG said it would buy back up to $3 billion of its own debt, in a move aimed at calming investor jitters ahead of the unveiling of a crucial strategy revamp.

The announcement is a signal of confidence, in that the bank has enough liquidity to take advantage of the recent slump in debt markets and scoop up its own debt at a discount. Credit Suisse shares and bonds rose in Friday trading, while the cost of insuring against default fell.

The Zurich-based bank has suffered a tumultuous week as markets questioned its stability amid a broader sell-off. Chief Executive Officer Ulrich Koerner is due to detail the bank’s second strategy overhaul in a year at the end of this month, widely seen as a critical opportunity to restore faith in the lender after more than a year of losses and management missteps.

The debt repurchase plan is “a smart move, it builds confidence in the liquidity of the balance sheet and helps lower Credit Suisse’s funding costs,” said Filippo Maria Alloatti, head of financials credit at Federated Hermes Ltd. in London.

The debt buyback echoes a $5.4 billion offer made by Deutsche Bank AG in 2016 as markets pummeled the German lender, though the calming effect was short-lived.

The offer includes euro and pound sterling debt securities worth up to 1 billion euros ($980 million) and a separate offer for US dollar securities up to $2 billion. Credit Suisse shares were up 6.9%, trading at 4.50 Swiss francs at 12:30 p.m in Zurich. The cost of insuring against default on five-year senior debt fell to 322 basis points, according to ICE Data Services, after surging to unprecedented levels earlier this month.

The bank is looking to buy the bonds at deeply discounted prices. For example, Credit Suisse will pay less than 96 cents on the euro to buy a 750-million euro floating-rate note that was indicated above face value last Friday, and offer a spread of 350 basis points over German government bonds for a 1.5-billion euro issue trading well below 300 basis points in September.

When the lender raised capital with so-called Additional Tier 1 notes in the summer, the riskiest type of bank debt, it had to pay an almost double-digit coupon in a dollar-denominated transaction. That note is now quoted more than 10 cents below face value.

“The transactions are consistent with our proactive approach to managing our overall liability composition and optimizing interest expense and allow us to take advantage of market conditions to repurchase debt at attractive prices,” Credit Suisse said in the statement.

The Swiss bank in August appointed Dixit Joshi, a former Deutsche Bank executive, as its chief financial officer to replace David Mathers. Credit Suisse’s overhaul is likely to also include asset sales or market exits across units, and is expected to significantly pare back the loss-making investment bank. The results of the review are expected to be presented alongside third-quarter earnings on Oct. 27.

Investors have worried about how the bank will cover the cost of its restructuring plan and what that would mean for its capital strength, especially during a period when the investment bank has been suffering heavy losses. Credit Suisse had a CET1 capital ratio of 13.5% at June 30, far above the international regulatory minimum of 8% and the Swiss requirement of 10%.

“The bond buyback is Credit Suisse’s way of muddling through the current situation as they hope to bring down its CDS spreads before they tap the bond market again to raise capital,” said Alicia Garcia Herrero, chief Asia Pacific economist at Natixis SA. “Credit Suisse may also have picked the right time as the current market also happens to be one of the few windows this year for companies to raise bonds in the public market.”

Credit Suisse’s cash tender offer for some of its senior bonds issued out of the operating company may help to stabilize spread performance elsewhere in the bank’s liability structure. But the scope of the tender offer is limited -- up to 3 billion francs -- which may signify that the bank wants to preserve its hitherto healthy liquidity at this uncertain time.