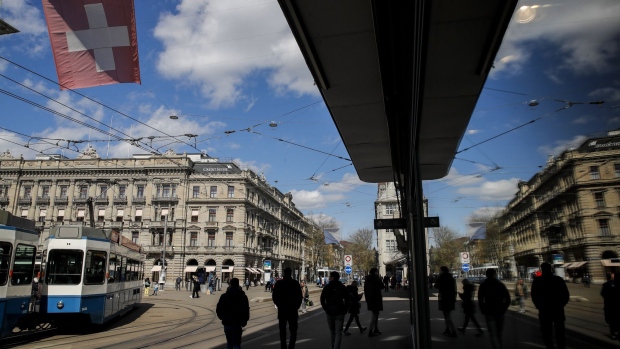 Passenger trams travel away from the Credit Suisse Group AG headquarters in Zurich, Switzerland, on Thursday, April 8, 2021. Credit Suisse Chief Executive Officer Thomas Gottstein gathered dozens of managing directors at the global bank on a conference call late Tuesday, as part of crisis-management efforts after the lender announced that it stands to lose as much as $4.7 billion amid the meltdown of hedge fund Archegos Capital Management. , Bloomberg

Swiss regulator Finma imposed temporary restrictions on Credit Suisse Group AG in making new loans to financially weak countries and those with a high risk of corruption in the aftermath of a scandal in Mozambique.

The Swiss bank will only be able to make such loans if it or the borrower informs the public transparently about the purpose, amount, terms of the loan and any guarantors of the credit, Finma said in a statement late on Tuesday.

The restrictions on new loans to “corruption-prone” states come as a result of the Zurich-based bank’s guilty plea and settlement with authorities in Switzerland, the U.S. and the U.K. over its role in a fundraising scandal that saw hundreds of millions looted from Mozambique, helping tip the African nation into economic crisis.

As part of the settlement, Finma is appointing an independent third party to review the bank’s existing credit transactions with financially weak and corruption-prone states or companies with guarantees from such states, according to the statement. The regulator will also oversee that the bank implements correct anti-money laundering rules and reporting obligations.

The restrictions on new loans will remain in effect until the bank has made all the remedial measures imposed by regulators.