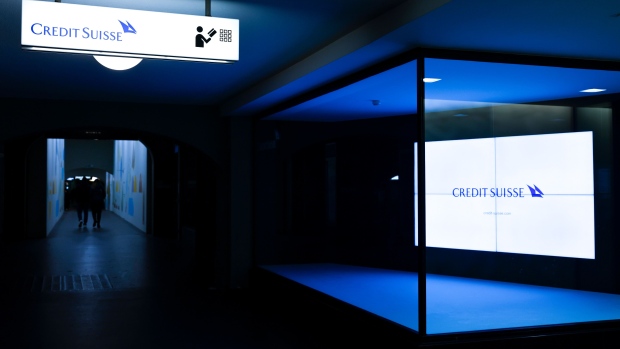 An illuminated sign in the window of a Credit Suisse Group AG bank branch at night in Bern, Switzerland, on Sunday, Nov. 27, 2022. Credit Suisse clients pulled as much as 84 billion Swiss francs ($88.3 billion) of their money from the bank during the first few weeks of the quarter, underlining ongoing concerns over the bank’s restructuring efforts after years of scandals. Photographer: Stefan Wermuth/Bloomberg , Bloomberg

(Bloomberg) -- Banks handling Credit Suisse Group AG’s rights offer expect nearly all of those rights to be exercised, spelling success for a capital raise that looked shaky as recently as last week.

Lenders arranging the deal currently expect investors to take up well above 90% of the stock on offer, the people said, asking not to be identified because the information is private. The banks don’t currently anticipate needing to hold a sizeable amount of Credit Suisse stock on their books afterwards, according to the people.

Any remaining amount is expected to be small enough that banks will be able to slowly sell the shares in the market, the people said. If needed, they will also be able to lean on sub-underwriters, major investors that have agreed to snap up a certain amount of unsold stock. The rights issue was fully underwritten by about 20 banks led by Deutsche Bank AG, Morgan Stanley, RBC Capital Markets and Société Générale SA.

The bank is raising 4 billion francs in two steps to shore up its balance sheet as it seeks to put to rest concerns about its financial position after billions in losses over the past two years, recent client defections and asset outflows. The Saudi National Bank was an anchor investor in the capital raise, committing to invest about 1.5 billion francs, mostly through a private placement last month.

As a result of this transaction, the Saudi National Bank will be the bank’s largest shareholder, with a stake of as much as 9.9%. The new shares will begin trading on Dec. 9 on the Swiss stock exchange.

Credit Suisse needs the funds to help pay for the exit of large parts of its investment bank and 9,000 job cuts. The bank has warned that it will have a fifth straight quarter of losses as it reels from years of scandals and missteps that have eroded investor confidence and sent clients fleeing.

A rights issue is an offering of shares to existing investors to allow them to buy shares in proportion to their holding at a discounted price. Taking up the rights compensates investors for the dilution that occurs in a capital raising. In total, Credit Suisse is planning to issue 1.35 billion new shares, an increase of more than half compared with the 2.65 billion common shares it had outstanding at the end of September.

A successful rights offer spells the end of a wild ride for the troubled Swiss bank’s stock over the past weeks, when at one point a 13-day losing streak took the shares down to near the price of what had supposed to be a heavily-discounted offer. Comments by Chairman Axel Lehmann on Friday that the bank had stopped massive outflows provided some relief, only for the stock to resume its downward slide on Tuesday.

Last week, the shares fell to a record low of about 2.67 Swiss francs, just above the price of 2.52 francs for subscription rights that Credit Suisse offered existing investors. The bank had set the price at a discount of about 32% to its stock value after the strategy presentation in October.

Investors late last week took comfort from comments by Chairman Axel Lehmann that the main indicators of the bank’s financial stability were strong and that its level of liquidity was improving after declines in recent weeks. The Zurich-based bank’s liquidity coverage ratio, which measures the quantity of easily-sold assets available to meet obligations, is currently at 140%, Lehmann said.