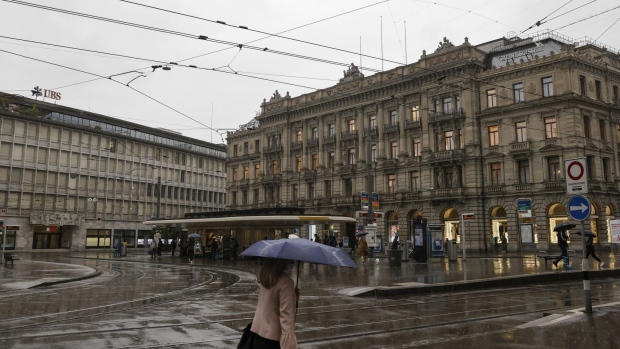 A UBS Group AG office building, left, alongside the Credit Suisse Group AG headquarters in Zurich, Switzerland, on Tuesday, July 13, 2021. Credit Suisse has been shaking up senior ranks and scrutinizing businesses as it tries to rebuild its reputation after dealings with Archegos and Greensill Capital ended in scandals. Photographer: Stefan Wermuth/Bloomberg , Bloomberg

(Bloomberg) -- Credit Suisse Group AG’s Ralf Hafner, who served as chief risk officer for the firm’s investment bank, will leave after the bank’s probe into its Archegos Capital Management disaster faulted employees for not acting on warning signs before the family office’s collapse.

Hafner will leave the Swiss bank at the end of next month, according to a person briefed on the matter. Hafner joined Credit Suisse last year after more than two decades at Goldman Sachs Group Inc., according to his LinkedIn profile.

A report prepared by the law firm Paul, Weiss, Rifkind, Wharton & Garrison LLP concluded while the bank’s systems identified the risks, they were “systematically ignored” by a prime services unit with a “lackadaisical attitude toward risk.” The report, which didn’t name individuals, said the investment bank CRO didn’t appear to escalate issues around Archegos to his boss.

The report noted that the investment bank’s risk chief also served that same role for the international business, which may have diverted his attention prior to Archegos’s default.

Credit Suisse’s $5.5 billion loss from the March collapse of Archegos far surpassed that of any other bank and forced it to cut its dividend, pause share buybacks and raise capital.