In the midst of his dizzying rise, Hamza Lemssouguer was a prize worth vying for at Credit Suisse Group AG.

The firm allowed its 30-year-old trading prodigy to take on high levels of risk to rack up profits in illiquid corners of wild markets. When he turned that hot run into a job at hedge fund Citadel late last year, the Swiss bank promised him his own fund to lure him back.

But at the chastened Credit Suisse, which has lurched from one crisis to the next this year, Lemssouguer apparently became a risk too great. The bank on Wednesday canceled plans for the young star’s fund, cutting him loose to pursue his ambition without its money or backing. The episode stands as a marker of the bank’s abrupt change in attitude after embarrassing debacles stemming from Archegos Capital Management and Greensill Capital spiraled into billions of dollars in losses for the firm.

“These accidents more than anything showed that Credit Suisse was really stretching to get its returns over the last few years,” said Peter Hahn, a former banker who is now emeritus professor at the London Institute of Banking & Finance. “And it looks like those kinds of stretches are now going to be fewer and farther between.”

Lemssouguer’s profitable ascent didn’t come without controversy. The London-based trader rose to prominence buying large blocks of debt, effectively enabling him to corner the opaque market for illiquid securities and spurring losses for rivals who took the other side of the trade. This account of his tenure at Credit Suisse is based on interviews with eight people who spoke on the condition of anonymity.

In 2019, at least three rivals and trading customers made complaints against him to the U.K.’s financial watchdog, alleging insider trading and price manipulation, according to people familiar with the matter. One of those complaints came from a hedge fund that lost money on a bet which paid off handsomely for Credit Suisse, while another came from a firm that actually made money on the trade, the people said.

Although Credit Suisse didn’t receive any formal queries from the U.K.’s Financial Conduct Authority after the complaints, some clients informally raised concerns about Lemssouguer’s tactics with contacts working at the bank, one of the people said. Those complaints weren’t escalated by the clients, the person said.

It’s not clear if the U.K. regulator looked into the complaints against Lemssouguer. The FCA will typically acknowledge any complaint to parties who file them, but may not always provide any information on how it is handling the complaint. The FCA declined to comment.

Lemssouguer, who declined to comment for this story, referred all questions to Credit Suisse.

“We have clear processes for dealing with complaints from clients and other counterparties,” a Credit Suisse spokesman said in an emailed statement. “These are formally logged and reviewed to determine whether there has been any form of wrongdoing. We received no formal complaints in relation to this matter”.

The collapse of secretive family office Archegos in March, just weeks after the implosion of supply-chain finance provider Greensill, has shaken Credit Suisse and ushered in a period of intense self-reflection at the bank. Switzerland’s second-largest lender is now investigating what went wrong with its internal controls and has overhauled its top ranks -- with its asset management boss, chief risk officer and investment banking head stepping down in quick succession.

Credit Suisse executives put the launch of Lemssouguer’s absolute return credit fund, which sought to make big bets on stressed businesses, on hold in March as part of a broader review of its asset management unit. After being forced to wind down US$10 billion in supply chain funds tied to Greensill, the bank decided to approve only those funds it deemed relatively low-risk and uncomplicated, according to people familiar with the matter.

On Tuesday, during a call to discuss the launch of new funds, some Credit Suisse executives sounded a pessimistic note on products that stray from traditional strategies. And by Wednesday, the bank announced that it was cutting its one-time star adrift.

Just six months ago, Credit Suisse persuaded Lemssouguer to give up a role at Ken Griffin’s Citadel. The Chicago-based hedge fund firm, with US$39 billion in assets, hired him as a portfolio manager as part of a global credit expansion, Bloomberg reported at the time.

It’s easy to understand why Credit Suisse wanted the trader back: he ranked as one of the firm’s top performers, helping the bank’s European high-yield desk generate about US$220 million in 2020 by making outsize bets in risky junk bonds, distressed debt and illiquid securities, according to people familiar with the matter. That’s about 5.5 per cent of the bank’s total fixed income trading revenues.

In recent marketing materials, Credit Suisse described the youthful trader as a savant of the junk-bond market who generated historic profits as he wagered on the fortunes of troubled European businesses.

“His ability to understand the psychology and risk tolerance across market participants and assess liquidity in that context led to some of the most profitable years in the trading desk’s history,” according to a presentation advertising his new credit fund seen by Bloomberg News. “He was instrumental in the visibility and risk-taking capacity of the group and introduced rigorous investment and risk-management processes.”

Born in Morocco and educated at École Polytechnique in France, Lemssouguer arrived at Credit Suisse in 2014, fresh out of a summer internship program at Goldman Sachs Group Inc. His first job at the Swiss bank was as a London-based analyst, and he was later made a trader on the high-yield desk.

Lemssouguer’s early days at Credit Suisse coincided with a risk-cutting exercise under then-CEO Tidjane Thiam. After losing about US$1 billion from writedowns in distressed bonds and securitized products in 2016, Thiam pledged a retreat from riskier activities.

But by 2019, Credit Suisse had rediscovered its appetite for aggressive credit trades. The name behind the higher volumes of debt being traded was Lemssouguer, who created a stir with big wagers on the debt of companies such as travel firm Thomas Cook Group Plc and U.K.-based debt collection firm Lowell Group.

His signature strategy entailed buying up huge chunks of debt and offloading the paper at a higher price, according to people familiar with the matter. At times, he controlled as much as 90 per cent of the flows on deeply distressed company debt, and was given leeway by Credit Suisse to buy blocks of bonds worth up to US$100 million, some of the people said. That’s unusually large by industry standards: at rival banks, trades less than one-third of that amount need to be cleared by a committee of credit executives.

Yet Lemssouguer’s tactics were making some market participants uneasy. At least two investment funds and a rival bank accused Lemssouguer in complaints to the regulator of distorting market prices and trading on inside information relating to a 33.5 million-pound (US$47 million) bond buyback by Lowell in August 2019, the people said.

Bond buybacks are typically kept private between the issuer, the bank arranging the deal and investors that have agreed to sell. While Credit Suisse wasn’t handling the buyback, one firm that complained cited information distributed by Lemssouguer prior to the buyback that indicated he was aware of the pending transaction, according to people familiar with the matter.

Lemssouguer’s bullishness on Lowell unsecured bonds had long predated the buyback, as his group had been recommending clients invest in them since at least 2017, according to a note seen by Bloomberg. And Lowell executives had indicated in April 2019 that they would like to replace the bonds with secured debt at some point.

After the buyback was announced, Lowell’s bond prices surged while the cost of insuring the debt plunged, handing Lemssouguer a profit on his trade, the people said. 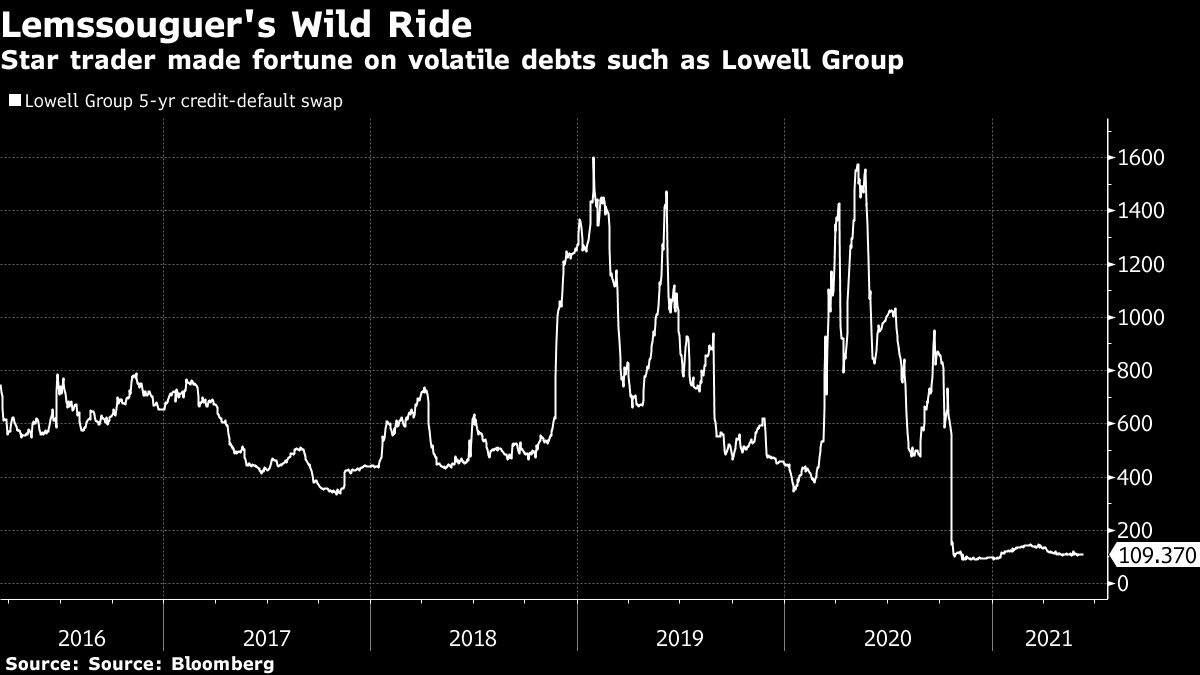 Despite the complaints, 2020 started as another big year for the trader, who was able to find massive trading opportunities amid the chaos spurred by the global pandemic. In the first quarter of 2020, he traded at least US$21 billion, more than some banks do in a whole year.

He soon caught the attention of Citadel’s Pablo Salame, the head of global credit at the firm. Salame, who was building out his team after joining Citadel from Goldman Sachs in 2019, tapped Lemssouguer in September.

By November, though, Credit Suisse had enticed Lemssouguer back by offering him a chance to oversee the launch of his own fund platform within its investment unit, with seed money from the bank to give his effort a boost. His prospective fund is named Arini, a reference to the parrots he has bred since he was growing up in Morocco.

Lemssouguer had started to meet prospective investors in 2021 and planned to raise as much as US$500 million for his debut fund when Credit Suisse was shaken by the twin implosions of Greensill and Archegos.

Lemssouguer, meanwhile, is being encouraged to go it alone.