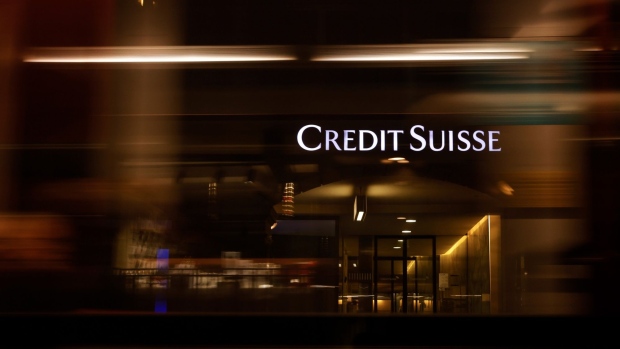 A Credit Suisse Group AG bank branch in Bern, Switzerland, on Sunday, Nov. 27, 2022. Credit Suisse clients pulled as much as 84 billion Swiss francs ($88.3 billion) of their money from the bank during the first few weeks of the quarter, underlining ongoing concerns over the bank’s restructuring efforts after years of scandals. , Bloomberg

(Bloomberg) -- Credit Suisse’s cash call on existing investors started with a pledge that it would fund a dramatic overhaul. With a week to go, bankers were sweating as the discount meant to attract new money nearly evaporated. It ended with the bank celebrating a bonus $8 million of proceeds.

Credit Suisse Group AG’s $2.4 billion rights offer was supposed to be one of the simpler parts of a hugely complex restructuring, but it featured plenty of obstacles and drama.

Initially marketed alongside its restructuring plan in October as a chance to buy new shares at a big discount, the stock had already gone into a tailspin before the offer period, with Credit Suisse warning of more losses and huge outflows. After 13 days of back-to-back declines, it was trading near the rights price, raising questions whether investors still had an incentive to buy the shares.

Behind the scenes, external bankers working on the offering were getting concerned about Credit Suisse’s hands-off approach and expectations that it would sail through without a hitch, according to people with knowledge of the matter. If the price fell further, it could turn into an embarrassment for all involved.

With only a few days left, Chairman Axel Lehmann stepped in, assuring markets that the bank had practically stopped the bleeding and that its liquidity had improved. Shareholders ended up buying all the stock on offer, handing Lehmann and Chief Executive Officer Ulrich Koerner the funds needed to pay for thousands of job cuts and an exit from large parts of the investment bank.

“The successful completion of the capital increase is a key milestone for the new Credit Suisse,” Koerner said afterwards. “It will allow us to further support our strategic priorities from a position of capital strength.”

The bank sold 98.2% of the shares and placed the rest in the market above the offer price, raking in about $8 million more than planned, according to the people, who asked not to be identified discussing the private information.

The rare piece of good news caps a tumultuous period during which many shareholders decided to sell their subscription rights, taking a quick profit rather than putting more money into the company. Almost half of the rights ended up being traded, according to people who worked on the deal.

The buyers were often firms specializing in exploiting price differences between the rights and the shares, the people said. That drove down the shares further, pushing them as low as 2.65 francs on Dec. 1, halfway through the offer period. The discount at which existing investors could buy new stock had narrowed to just 5%, from more than 30% when the plan was announced.

Credit Suisse executives had appeared unusually sanguine about the process until then, according to two people, one of whom contrasted their approach with the hands-on involvement of Deutsche Bank AG executives in a crucial stock offering five years earlier. The Swiss firm, for instance, didn’t set a sales meeting with all banks early on in the offering, the people said.

The bankers working on the rights issue also wanted management to meet with more investors, but Lehmann and Koerner had just laid out an extensive restructuring plan weeks before. Executives were still juggling various pieces of that strategy, such as finding backers for parts of the investment bank. Adding to their challenges, they were also running a bond sale in parallel.

By Friday, as the rapid decline in the share price spooked markets, that changed. With little more than four days to go, Credit Suisse convened a sales gathering and met with investors in what’s known as a roadshow. some of the people said.

On Bloomberg TV, Chairman Axel Lehmann sought to calm things, saying the main indicators of the bank’s financial stability were strong and that its level of liquidity was improving after declines in prior weeks.

“When I speak to clients, I already know that there are going to be inflows,” Lehmann said in the interview. “We already see it partially happening.”

The market was working against the bank during the offer period, which was normal, Lehmann said. But the rights offering was fully subscribed, and there was no question that Credit Suisse would raise the capital needed, he added. If investors wouldn’t pick up the shares, the underwriters would.

In the end, Credit Suisse didn’t have to rely on that backstop. The firm pulled in 4 billion francs in total after selling shares to selected investors in a private placement earlier.

Credit Suisse has passed the first milestone on its path to restructuring, JPMorgan Chase & Co. analysts wrote in a note. It is now a “show me” stock, and further gains depend on the company “providing clarity” around the other pieces of its restructuring.