Credit Suisse Group AG clients pulled as much as $84 billion Swiss francs (US$88.3 billion) of their money from the bank during the first few weeks of the quarter, underlining ongoing concerns over the bank's restructuring efforts after years of scandals.

The Zurich-based bank warned on Wednesday that it will face a loss of up to $1.5 billion Swiss francs (US$1.6 billion) for the three final months of the year, partly as a result of the decline in wealth and asset management client funds from the start of October to Nov. 11. That's potentially the worst exodus since the financial crisis.

The outflows were particularly pronounced at the key wealth management unit, where they amounted to 10 per cent of assets under management. While they have been “reduced substantially from the elevated levels of the first two weeks of October 2022,” they have yet to reverse, the bank said. 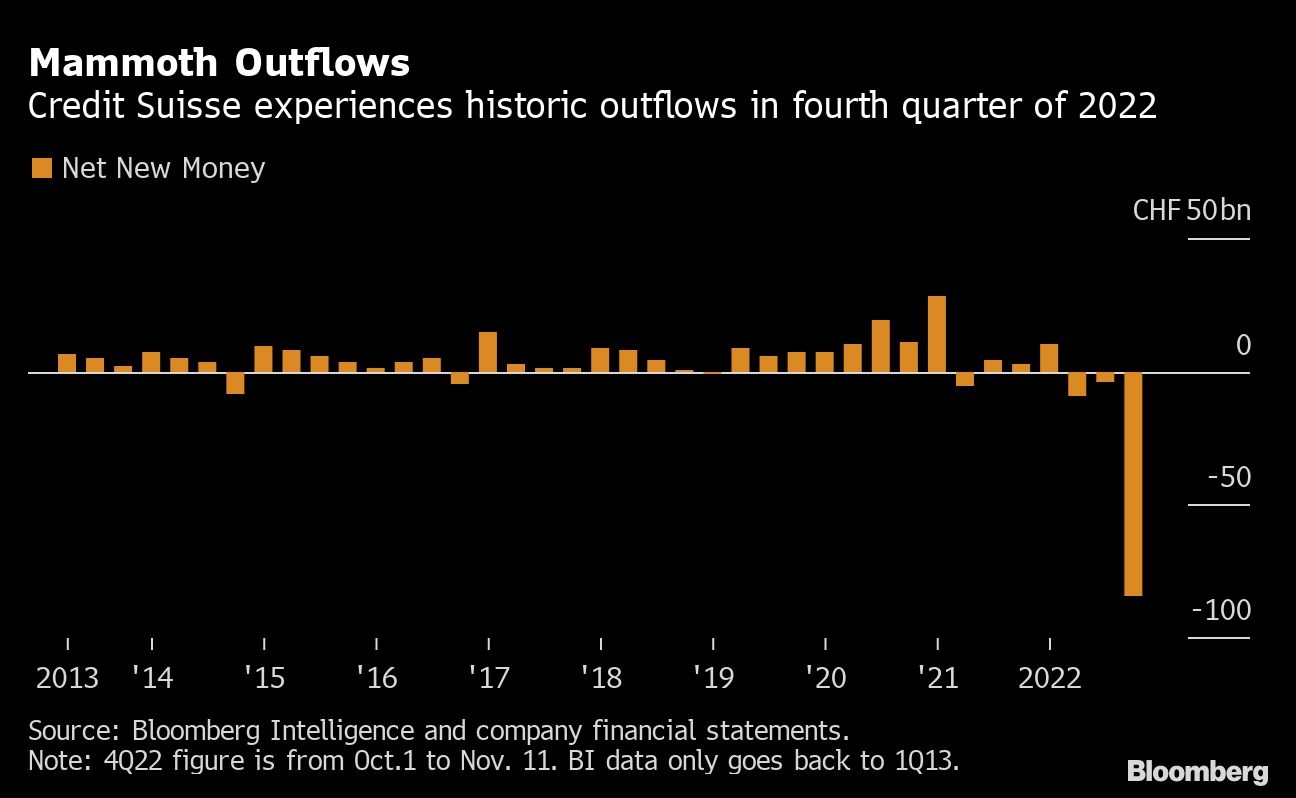 The grim outlook underscores the urgency for Chairman Axel Lehmann to put Credit Suisse on a sustainable footing again through a sweeping overhaul that will see its investment bank carved up and greater focus placed on private banking. Shareholders on Wednesday approved a capital raise of about four billion francs that's needed to finance the restructuring, which will also see about 9,000 jobs cut by 2025.

“Credit Suisse is on an important journey,” Lehmann said in a speech posted on the lender's website. “We will work to rebuild and refocus this proud 166-year-old Swiss institution with global reach.”

Credit Suisse declined 4.6 per cent at 11:11 a.m. in Zurich trading, putting the shares on track to close at a new record low.

This is a modal window.The media could not be loaded, either because the server or network failed or because the format is not supported.

The Zurich-based bank said it expects losses in both the wealth management division and its investment banking unit due to “subdued activity, market conditions, continued outflows of customer assets and the sale of non-core businesses.”

The client withdrawals contrast with inflows at rival wealth managers in recent months. AT UBS Group AG, investors added more than US$17 billion to the wealth management unit in the third quarter. Julius Baer Group Ltd. said on Monday that it saw a “clear improvement” in new money flows since the end of June, with wealthy clients adding a net 4.1 billion francs in the four months through October.

“The massive net outflows in Wealth Management, CS's core business alongside the Swiss Bank, are deeply concerning -- even more so as they have not yet reversed,” said Andreas Venditti, banking analyst at Bank Vontobel AG in Zurich. “Credit Suisse needs to restore trust as fast as possible - but that is easier said than done.” 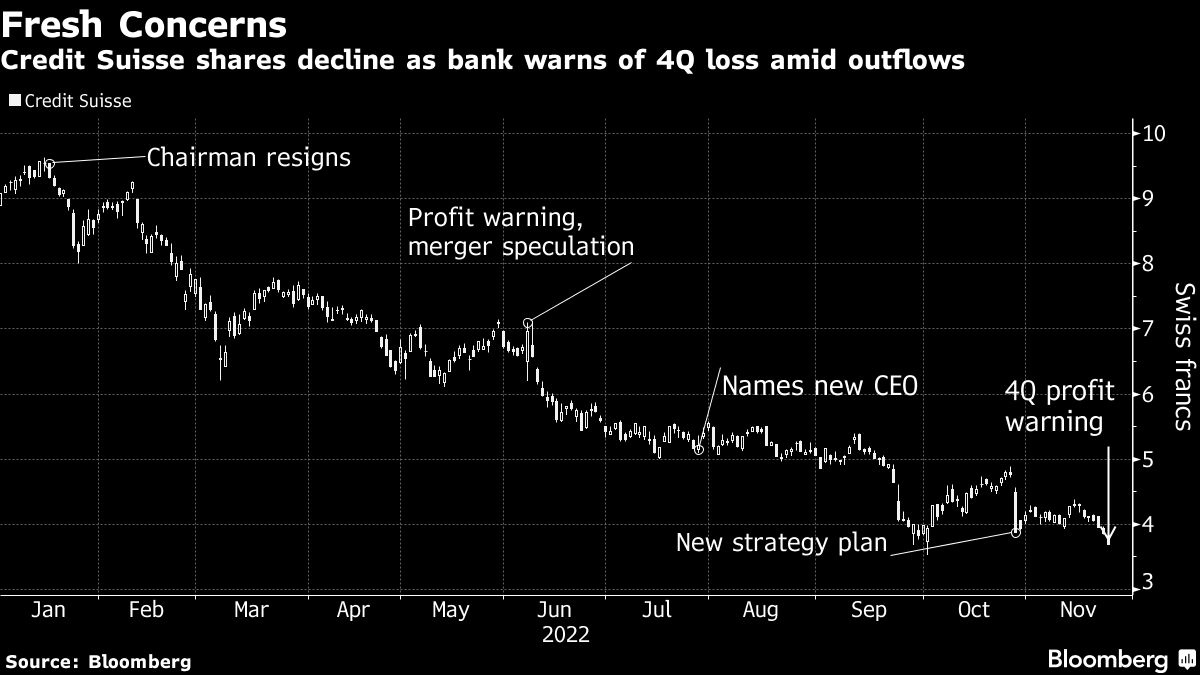 Analysts at JPMorgan Chase & Co. and Jefferies said the wealth-management outflows were much worse than expected, and warned that bank wasn't out of the woods. Ethos Foundation, a proxy advisor, said more steps may be needed to restore investor confidence than the bank has so far outlined.

“Cutting cost is one thing but growing the business is another one,” Vincent Kaufmann, Chief Executive Officer of Ethos, said on Bloomberg TV. “Maybe they can do both, but it remains to be seen.”

Credit Suisse's actual results in the fourth quarter will depend on “a number of factors,” including the remaining performance for the rest of the year, the continued exit of non-core positions, any goodwill impairments, and outcomes of other asset sales, the bank said.

Credit Suisse had warned last month that a loss for the fourth quarter was to be expected, with CEO Ulrich Koerner saying that the bank will “definitely” be profitable from 2024.

Lower deposits and fewer assets overseen for clients are expected to negatively impact the bank's net interest income and recurring fees for the wealth unit, it said.

Wealthy clients were spooked by the volatile swings in the cost to insure the bank's debt against default in early October amid speculation about how severe the restructuring would be. That resulted in several rich families across the Middle East and Asia collectively pulling hundreds of millions of dollars, people familiar told Bloomberg at the time.