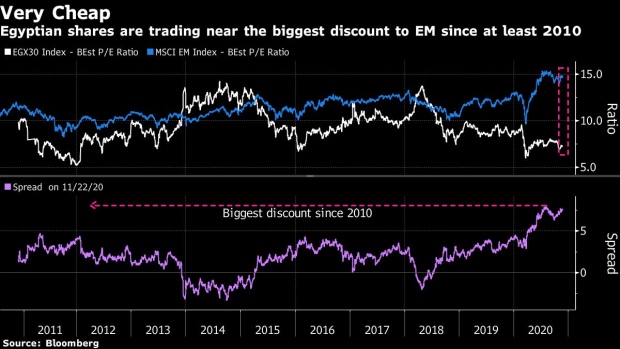 A spike in the Dax Index curve indicates a stock price rally at the Frankfurt Stock Exchange, operated by Deutsche Boerse AG, in Frankfurt, Germany, on Monday, Nov. 9. 2020. The clearest sign yet of progress on a Covid-19 vaccine is fueling a rally across global stock markets. Photograph: Alex Kraus/Bloomberg Photographer: Alex Kraus/Bloomberg , Bloomberg

Egypt, the worst performing major equities market in the Middle East and North Africa this year, is poised for a recovery led by a positive outlook for local companies, according to Credit Suisse.

A decline in trading volume following a pandemic-led slump and a decrease in the number of stocks included in global benchmarks were “significant headwinds” to the Egyptian market recently, said Fahd Iqbal, the head of Middle East research at Credit Suisse in Dubai. The EGX 30, little changed on Sunday, has retreated 22% this year, compared to a 8.5% increase for the MSCI Emerging Markets Index.

The underperformance put stocks in Cairo at a significant discount versus those in other developing countries, with the Egyptian benchmark trading near the cheapest level against the MSCI Emerging Markets Index since at least 2010. The index was pressured further last month as the biggest listed lender, Commercial International Bank Egypt, slumped after the central bank raised concerns over governance and its chairman quit.

“We’re positive across a lot of areas of Egypt,” Iqbal said in an interview with Bloomberg TV on Sunday. While low liquidity remains a concern, fundamentals are “very robust” and “the growth outlook for exporters and for domestically-focused companies alike is very constructive.” He also said the Egyptian pound is not expected to drop by more than 5% over the next year.