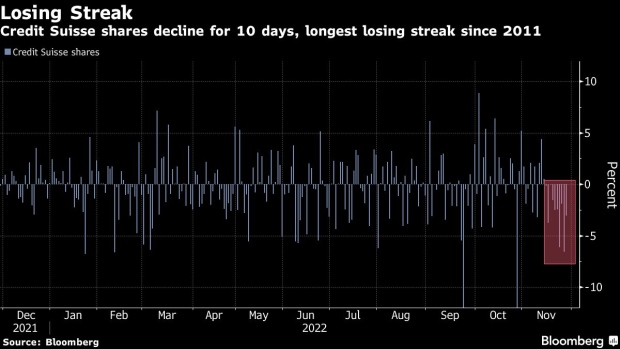 (Bloomberg) -- Shares in troubled Swiss lender Credit Suisse Group AG slipped as much as 5.4% on Monday, hitting a fresh record low and putting them on track for their longest losing streak since 2011.

The stock has fallen for ten straight days, losing as much as 27%, with last week’s warning about massive outflows in the core wealth management business stunning investors. News that the lender agreed a sale of a large part of its securitized products business to Apollo Global Management Inc. was also received negatively, with analysts saying many details were lacking.

The developments add to woes in recent years as a succession of big losses and management chaos shattered Credit Suisse’s status as one of Europe’s most prestigious lenders. The bank last month announced a restructuring that included breaking up the investment bank, separating the advisory and capital markets unit and thousands of job cuts.

To pay for the restructuring, the bank is raising 4 billion Swiss francs ($4.2 billion) through a rights issue and selling shares to investors including the Saudi National Bank. The rights are trading on the SIX Swiss Exchange from today until Dec. 6.

Credit Suisse’s 5-year credit default swaps -- showing the cost to insure its debt against default -- rose on Monday, and are nearing the record they hit in October.

--With assistance from Macarena Muñoz and Michael Msika.