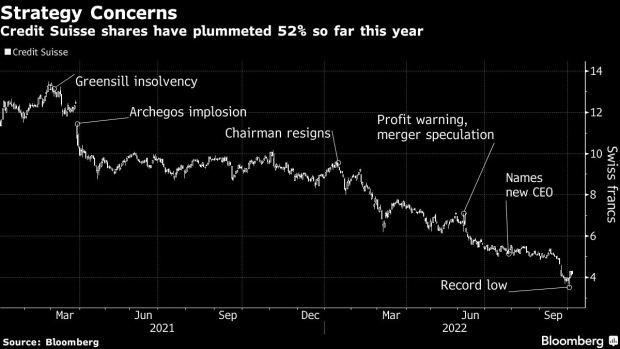 A sign in the window of a Credit Suisse Group AG bank branch in Geneva, Switzerland, on Thursday, Sept. 1, 2022. Credit Suisse is weighing cutting 4,000 jobs, a significant part of them in Zurich, as the lender overhauls its business after a series of financial and reputational hits, according to Handelsblatt. , Bloomberg

(Bloomberg) -- Shares of Credit Suisse Group AG are still worth more than the market is currently pricing, yet time has come for the lender to undergo a “final restructuring,” an analyst at JPMorgan Chase & Co. said.

The Swiss bank should pivot away from investment banking and focus on wealth management, while at current valuation management should look at every option to avoid a significant dilutive capital increase, Kian Abouhossein wrote in a note, upgrading his rating on the stock to neutral.

While the bank continues to get buffeted by negative newsflow on uncertainty over its strategy, clarity on its restructuring plans can help to restore stability. “We see $15 billion as minimum value today for Credit Suisse,” says Abouhossein. Credit Suisse shares currently trade at a market value of around $11.4 billion.

Shares jumped as much as 5.2% on Thursday before paring the gains, in the latest gyration for a stock that’s plummeted more than 50% this year as the Swiss bank struggles to contain the impact from losses that have left its investment bank on the ropes.

The lender is set to unveil a strategic review this month and may try to bring in an outside investor to inject money into a spinoff of its advisory and investment banking businesses, according to a Bloomberg report.

“It needs to undertake a decisive restructuring of its investment bank business, rather than another piecemeal restructuring similar to what has been done several times over the last decade,” says Abouhossein.

The lender now has four buy, 16 hold and eight sell recommendations, according to data tracked by Bloomberg.