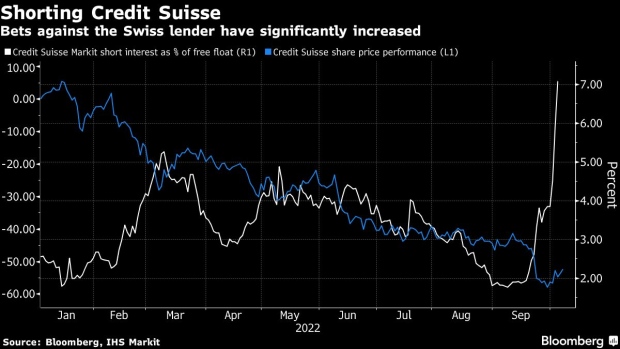 Travelers wait at a tram stop outside the Credit Suisse Group AG headquarters in Zurich, Switzerland, on Wednesday, Oct. 5, 2022. Credit Suisse has become a poaching ground for rivals in recent times, with the lender struggling to contain the fallout of a series of scandals and flagging performance. , Bloomberg

Short bets against Credit Suisse Group AG have quadrupled in a month, a further sign of fragile investor confidence ahead of this month’s announcement of a major strategic review.

The rising short interest will add to investor jitters after the stock plunged to a record low at the start of the week before rebounding. Credit Suisse has lost more than half its value this year, yet short selling pressure had eased significantly over the summer prior to the latest market turmoil, with the cost to insure the bank’s debt against default spiking to an all-time high.

Credit Suisse declined to comment on the short interest data when contacted by Bloomberg News.

Chief Executive Officer Ulrich Koerner is set to unveil the findings of his strategic review later this month and may try to bring in an outside investor to inject money into a spinoff of its advisory and investment banking businesses, according to a Bloomberg report.

Shares of the company rallied 8% on Friday, marking a 30% bounce from intraday lows on Monday. It’s still down 48% this year.