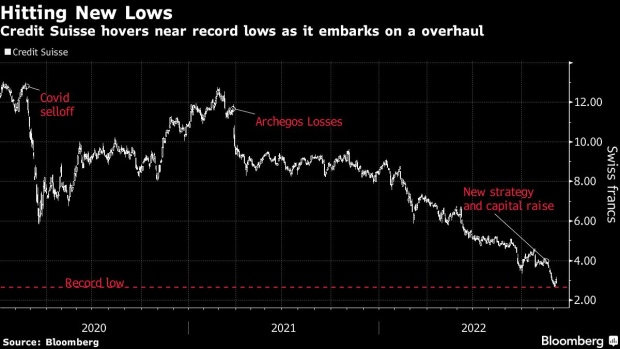 (Bloomberg) -- Credit Suisse Group AG slumped as the overhang from the Swiss lender’s rights offering hurt its shares yet again, turning the focus away from updates on the planned strategic changes.

Shares in the bank, which have been hit by management upheavals and scandals, fell as much as 8.7% reversing some of the gains they made in recent days as its eight-day discounted offer of stock to existing shareholders is about to close. They had surged on reports that Saudi Arabia’s Crown Prince Mohammed bin Salman is preparing to invest in its investment-bank unit and comments from its chairman that inflows were returning to its key wealth management unit.

The rights offer forms a part of Credit Suisse’s $4.2 billion in capital raising, which the bank is seeking to fund an overhaul of its operations. The lender’s embattled shares, which are down 60% this year, could see some relief after the completion of its rights offer.

JPMorgan Chase & Co. analysts last week said if the shares managed to stay above the rights-offer price of 2.52 francs until the last day of the issuance, the bank’s capital raise “was most likely a success.”

Even though it fell Tuesday, the stock has been hovering near 2.90 Swiss francs, well above the 2.52 franc price of subscription rights that Credit Suisse had offered its existing investors. The rights shares are set to start trading on Dec. 9.

The capital raising plan follows a tough couple of years for the Swiss bank, which has faced setbacks including the collapse of Archegos Capital Management and Greensill Capital, management changes, and a few profit warnings.

Those headwinds have taken a toll on market value. At 9 billion francs, it is a tenth of the level before the global financial crisis. The Swiss bank is lagging even further behind UBS Group AG, which has a market capitalization of 61 billion francs.

--With assistance from Jan-Patrick Barnert and Macarena Muñoz.