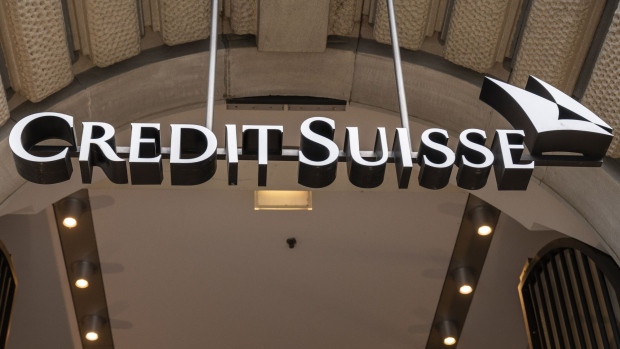 Signage hangs over the entrance of a Credit Suisse Group AG branch in Zurich, Switzerland, on Sunday, Sept. 25, 2022. Inflation in Switzerland has more than doubled since the start of the year and the State Secretariat for Economic Affairs expects it to come in at a three-decade-high of 3% for 2022. Photographer: Pascal Mora/Bloomberg , Bloomberg

(Bloomberg) -- Pimco, Sixth Street and an investor group including Centerbridge Partners are among a shortlist of bidders for at least part of Credit Suisse Group AG’s securitized products business as the Swiss firm moves closer to a deal.

Centerbridge is vying for the unit in its capacity as co-asset manager for Martello Re Ltd., a life and annuity reinsurance company, people with knowledge of the matter said, asking not to be identified because talks are private. It isn’t immediately clear if Pimco is pursuing a deal alone or as part of an investor group. Sixth Street is also bidding.

The discussions have become more advanced as Credit Suisse is due to announce its strategic plan in less than three weeks, one of the people said. Bloomberg reported last month that BNP Paribas SA and Apollo Global Management Inc. had expressed interest in the SPG sale. BNP’s interest has since cooled, according to people familiar with the matter.

A deal involving the securitized products group -- a trading unit with a history of high profits but also risks that require significant capital -- is a key pillar of Credit Suisse’s plan to downsize its investment bank and would help pay for other restructuring moves. A sale could lead to the release of regulatory capital and potentially some cash proceeds.

The SPG business, led since 2016 by New York-based trader Jay Kim, buys and sells securities which are backed by pools of mortgages and other assets, such as car loans or credit-card debt. The division also provides finance to clients who want to buy these products and will “securitize” loans -- dice them into new securities of varying risk and return -- on their behalf and sell them on to investors for a fee.

Pimco, owned by German insurer Allianz SE, is one of the world’s biggest fund managers. Martello was launched in January with the financial support of Massachusetts Mutual Life Insurance Co., among others. Barings and Centerbridge were picked to manage the reinsurer’s investment portfolio.