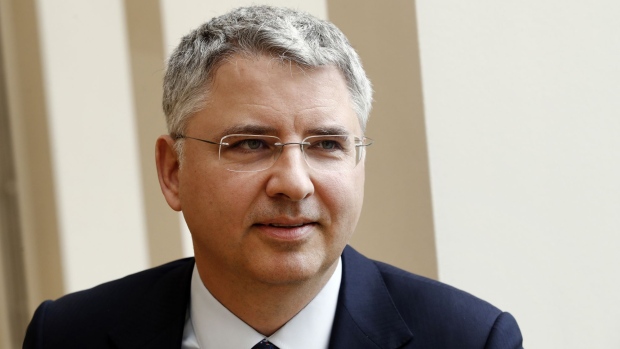 (Bloomberg) -- Credit Suisse Group AG’s Vice-Chairman Severin Schwan said he hasn’t yet decided on whether to stand for re-election in April, leaving open the prospect of an exit after a turbulent phase at the bank.

“It is now a question of stabilizing the bank, and I’m happy to support the new chairman in this,” Schwan said in an interview with the Swiss paper Tages-Anzeiger.

Schwan, 54, is Chief Executive Officer of Swiss pharmaceutical giant Roche Holding AG, and has come under renewed criticism that his dual mandates don’t leave him enough time to fulfill his duties at the country’s second-largest bank. The lender is currently reeling from a string of scandals topped by the resignation of Chairman Antonio-Horta Osorio this week.

Schwan said that the board of directors has agreed to not publish the contents of the final report of its investigation into Horta-Osorio, who stepped down after breaches of Swiss and U.K. quarantine rules were exposed.

Schwan, who has been vice chairman and lead independent director since 2017, was close to former chairman Urs Rohner and was a key backer of Rohner’s decision to oust former CEO Tidjane Thiam after the corporate spying scandal.

Schwan praised Rohner’s leadership “during this turbulent time” in 2020 and gave an emotional speech at the 2021 AGM further praising Rohner upon his departure. He played a lead role in the search for Horta-Osorio, Rohner’s replacement. After the Greensill Capital and Archegos Capital Management scandals last year, some top shareholders including Norway’s sovereign wealth fund decided to vote against Schwan’s re-election.

“The two mandates at Roche and Credit Suisse are basically compatible with each other,” he was quoted as saying in the interview. “In eight years on the Credit Suisse Board of Directors, I had two phases in particular that were very intense, once around the departure of Tidjane Thiam and now with the resignation of Antonio Horta-Osorio.”

Schwan described the rushed appointment of Axel Lehmann this week as chairman as “a stroke of luck.”

Schwan will need to make a decision on standing again by March, the newspaper reported.