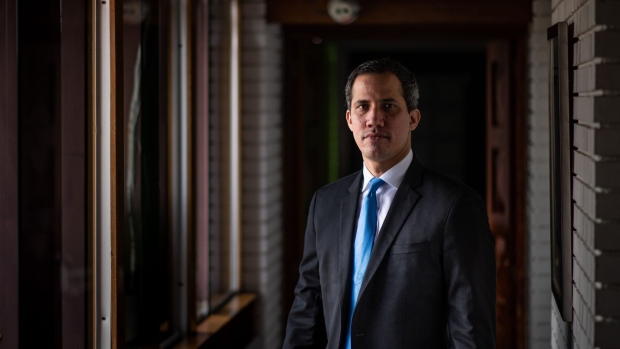 Juan Guaido, president of the National Assembly who swore himself as the leader of Venezuela, after a Bloomberg Television interview in Caracas, Venezuela, on Tuesday, June 8, 2021. Guaido discussed the acute dilemma now dividing their , Bloomberg

(Bloomberg) -- As the power of Venezuelan opposition leader Juan Guaido has dwindled, he’s kept something in his back pocket: Citgo Petroleum Corporation, the American refiner and gas distributor with the potential to bring in hundreds of millions of dollars to help topple President Nicolas Maduro.

Now Guaido is on the verge of losing the company. Creditors owed $7 billion in debts accrued by Maduro and his predecessor, Hugo Chavez, are mounting legal challenges to wrest control of it -- and appear to be succeeding.

For now, the U.S., which led dozens of countries in backing Guaido as interim president, is protecting Citgo. It has extended until October a provision that keeps the company in Guaido’s hands. But creditors are preparing to collect, and the market seems to believe the company will end up in non-Venezuelan hands for the first time since the 1980s.

Defaulted Venezuelan bonds that are secured by Citgo assets are now trading at prices that dwarf those on the country’s bonds that have no such backing -- 25 to 29 cents on the dollar, more than double the price a year ago (Other defaulted Venezuelan and PDVSA debt trades for 5 to 11 cents.). They are also trading more frequently despite sanctions that prevent U.S. investors from buying.

Few foresaw the quandary in 2019 when the administration of Donald Trump recognized Guaido and severed ties with Maduro’s government, which owned Citgo. Trump officials had to decide what to do with the company, the owner of three refineries, six pipelines and 42 terminals across 21 states with 3,400 employees.

With Guaido seemingly poised to topple Maduro, and Citgo fundamental to the Venezuelan oil industry, the U.S. turned it over to the opposition.

Guaido installed seasoned oil professionals, including Carlos Jorda as chief executive and president. Citgo then raised $1.4 billion of junk-rated bonds in 2019, which it has continued to pay, alongside its other indebtedness. The notes, which mature in 2024, trade for close to par, according to Trace data.

But owning Citgo has hardly been a boon. As Venezuela’s oil output dropped, management had to replace the heavy crudes it was receiving from the country with similar grades from Mexico and Colombia. Venezuelan crude intake dropped from 29% in 2015 to zero in 2020.

Two refineries in the Gulf of Mexico were hit by hurricanes, a winter storm, the Colonial pipeline cyberattack and the pandemic slump. Last year, the company posted a $667 million loss.

Even more pressing are the mounting debts. When Guaido took over, the Maduro government was effectively let off the hook for payments that included compensation for an expropriated gold mine, unpaid bills and international bonds it used Citgo’s assets to borrow against.

Dozens of companies and individuals owed by the state of Venezuela or PDVSA now are pursuing claims against Citgo.

Dozens of companies and individuals owed by the state of Venezuela or PDVSA now have pending claims against Citgo’s parent company in the U.S., PDV Holding, Inc.

Chief among them are two PDVSA-related contracts: the oil company ConocoPhillips, owed $1.3 billion for assets seized by Chavez, and investors who hold $2 billion of defaulted PDVSA bonds, according to PDVSA. These bonds have a 50.1% security interest in the shares of Citgo Holding. Crystallex, a Toronto-based mining company, is owed $1 billion for an expropriated gold mine.

BancTrust&Co estimates Citgo’s worth at $7.8 billion and claims against it at $7 billion. A Delaware judge will decide how shares will be sold off and how proceeds divided.

Crystallex, undergoing a bankruptcy reorganization, won a ruling in Delaware showing that PDVSA and Venezuela are the same entity, and its oil assets in the U.S. may be pursued.

In coming weeks, a special master is expected to present a sales order to a judge. However, a license from the Treasury Department’s Office of Foreign Assets Control is likely to be required.

“This is a real threat for Citgo,” said Horacio Medina, Guaido’s point person on PDVSA in the U.S. He said his group needs urgently to present a plan to the courts.

But as a deadline approaches for objections to the auction, there’s little agreement on the Guaido team on how to proceed. One idea is to sell a refinery in Illinois, and try to settle with creditors. Guaido’s chief diplomat, Julio Borges, wants to transfer Citgo to an independent trust, according to a spokesman. Guaido hasn’t weighed in, the spokesman said.

Founded more than a century ago by an Irish-American oilman, Citgo -- whose red logo can famously be seen from Boston’s baseball stadium -- has been in Venezuelan hands since the mid 1980s. Controlling the world’s largest crude reserves, the Venezuelan government wanted Citgo as a buyer for its shipments. The refineries were able to handle the country’s heavy crude and the 5,000 service stations gave the company a ready buyer for gasoline.

After Chavez took over the oil industry in the early 2000s, installing cronies, Citgo and PDVSA turned into cash cows and political tools. Citgo revenues topped $30 billion in 2004, according to data compiled by Bloomberg.

In 2017, six Citgo executives in Venezuela were convicted of corruption and imprisoned. In April, Maduro ordered them moved to house arrest, which was considered an attempt to show goodwill to the Biden administration in hopes of winning sanctions relief.

In October, the Biden administration will have to decide whether it’s worth continuing to keep Citgo in the opposition’s hands. Officials from the State and Treasury departments did not respond to messages seeking comment.

With no sign that Maduro is losing power, pressure from creditors to sell seems likely to prevail. Igor Hernandez, a researcher at Rice University’s Center for Energy Studies in Houston, put it this way: “As things are evolving, Citgo is lost, not only for the opposition but for the country.”