An activist investor advocating for a board shake-up at Crescent Point believes the company has “failed miserably” in recent management decsions.

Sandy Edmonstone, president of Cation Capital, told BNN on Monday that his firm’s four nominees should be added to the company’s board to free up what he considers “stranded value in the company.”

“You take a look at all the operating metrics and the company has failed miserably,” Edmonstone told BNN. “This is demonstrated whether they’re trading at $9 a barrel on a 2P (proved plus probable) basis and finding production at $21 or you take a look at the share-price chart where the stock’s off 48 per cent year-over-year and shareholder comp[ensation] is up 17 per cent.”

“The Company fundamentally disagrees that a slate of directors, which does not have a plan nor add any incremental value, can be nominated at the last minute onto an independent board of directors,” Crescent Point said in a Friday release.

Edmonstone said Cation has had “limited dialogue” with the company.

Cation owns 0.3 per cent of outstanding company shares and lists say-on-pay, company debt and share issuances among its chief grievances with Crescent Point over the past four years.

“If you look at the balance sheet, every year since 2014, total debt has increased,” Edmonstone said. “When you look at 2015, they started the year saying they would be conservative, they came out and they did $1.8 billion of acquisitions. They diluted shareholders through equity issuances. They added a bunch of debt to the balance sheet and they delayed cutting the dividend when their peers were cutting the dividend.”

“First and foremost we’re shareholders and we want to see the company do well,” he added. “The underlying issue is in leadership and their inability to convert their strategy into shareholder value.” 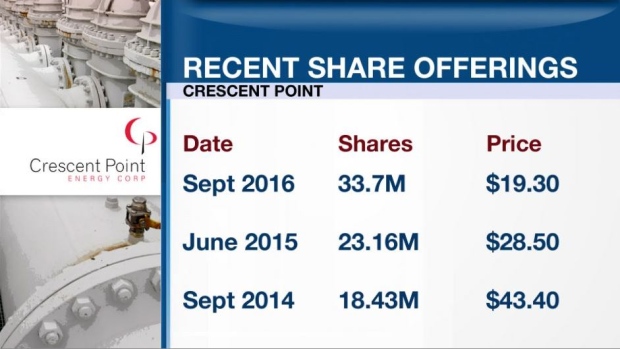