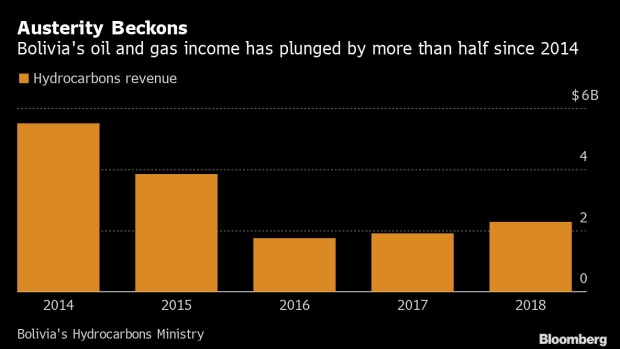 (Bloomberg) -- Natural gas exploration by global oil companies in Bolivia, key to growing the country’s sagging economy, has stopped amid an escalating political crisis that has left the Andean nation rudderless.

There’s no evidence Bolivia’s output or exports are affected. But new wells are key to revitalizing an aging industry as the economy slows and neighbors Brazil and Argentina seek to boost their own production. Shell has halted work on its Yapucaiti exploratory well, cut staffing at its Jaguar well and temporarily closed two offices “as a precautionary measure,” Cindy Babski, a spokeswoman, said in an email.

“Some of the exploration wells have been stopped,” the consutant Rios said by telephone from Santa Cruz, adding that most of Morales’s cabinet, including the hydrocarbons minister, have also resigned. “There is no established power in Bolivia.”

Bolivia’s oil and gas revenues have plunged by more than half since 2014. Meanwhile, public debt soared to 54% of gross domestic product in 2018, according to the International Monetary Fund. Economic growth in the country slowed to 4.2% in 2018 from a peak of 6.8% in 2013 due in large part to waning gas exports, according to the World Bank.

Election irregularities in the first round of presidential voting last month triggered weeks of violent clashes, with looting and arson, and intervention from the country’s armed forces. Morales said he was leaving office to avoid violence, adding that he wouldn’t flee the country since he hadn’t stolen anything.

Morales presided over an expanding economy and reduced poverty during his 14 years in office thanks to robust natural gas production from fields that were mainly discovered during previous administrations. For decades, Bolivia relied on captive markets in Brazil and Argentina where it could charge prices in excess of international benchmarks.

(Updates with comments from Shell in third paragraph.)

To contact the reporter on this story: Peter Millard in Rio de Janeiro at pmillard1@bloomberg.net

To contact the editors responsible for this story: Tina Davis at tinadavis@bloomberg.net, Reg Gale, Pratish Narayanan