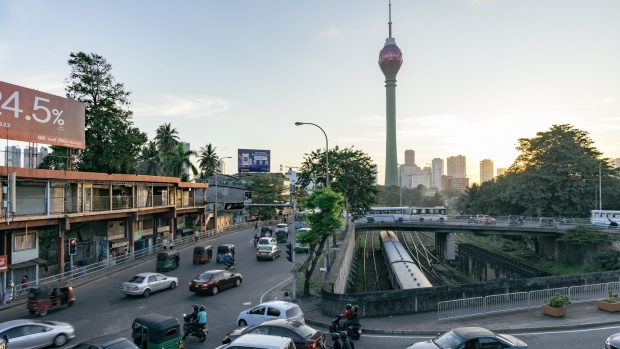 Vehicles on a road with the Colombo Lotus Tower in the background in Colombo, Sri Lanka, on Friday, Sept. 16, 2022. The 350-meter high Colombo Lotus Tower opened on Sept. 15 to the public that will be sold tickets to visit an observation deck with 360-degree views of the city and Indian Ocean. , Bloomberg

(Bloomberg) -- The heads of the World Bank and the International Monetary Fund both called for China to do more to help restructure global sovereign debt to reduce the risks of a debt crisis.

In discussions with Chinese lenders and the Premier Li Keqiang over the past two days, the two organizations “discussed the urgency of more rapid progress in the ongoing debt restructuring, discussions including for Zambia,” according to World Bank President David Malpass. “Changes in China’s positions are critical in this effort,” he said Friday in China after the meetings.

As the world’s biggest sovereign lender to developing countries, China has come under criticism for its perceived lack of participation in a global effort to lessen developing nations’ debt burdens. China’s outstanding loans to developing countries totaled $157 billion when the pandemic hit, but the actual amount is probably significantly higher, because countries are patchy on reporting it.

“We look forward to China’s participating actively with us in broader discussion on sovereign debt restructurings,” Malpass said at a press conference after the meetings. “We also discussed in details the next steps needed to reconcile debt and improve the transparency of China’s loan contracts, including removal of non-disclosure clauses, non-restructuring clauses, and hidden collateral and escrow arrangements.”

“We have had very fruitful exchange both on the common framework and some specific cases like Chad and Zambia,” IMF Managing Director Kristalina Georgieva said at the same event. “We talked about countries like Sri Lanka , Ghana, and how we can prevent individual distress potentially turning into a trigger for a global debt crisis.”