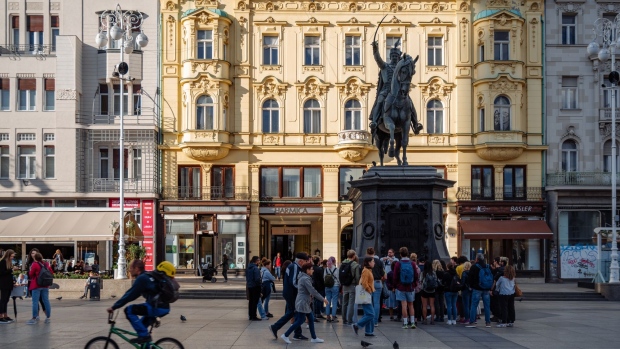 Tourists visit Ban Jelacic Square in Zagreb, Croatia, on Monday, Sept. 19, 2022. Croatia's government earlier this month approved an aid package worth 21 billion kuna ($2.8 billion) to ease the effects of the energy crisis and are seeking to raise minimum pension levels and increase assistance to families with children. , Bloomberg

(Bloomberg) -- Croatia expects to clear last formal hurdles in its quest to join the European Union’s visa-free travel zone before the end of the year, Prime Minister Andrej Plenkovic said.

The Balkan state is seeking to join the so-called Schengen area to boost its tourism-dependent economy and ease passage for the more than 10 million Europeans who travel to Croatia each year.

For the EU, it means deepening a commitment to a once-tumultuous region after the war in Ukraine highlighted the risk of failing to more closely engage with countries that are also targets of Russian influence.

“Croatia has fulfilled all the criteria, and is ready to provide additional clarification on that to anyone who seeks it, so that we can enter on Jan. 1,” Plenkovic told reporters in Prague on the sidelines of the EU summit on Friday.

After assessing Croatia’s readiness on criteria including defend its border and controlling immigration, a European Parliament committee is expected to deliver a positive opinion on Croatia’s entry in coming weeks, he said. The final decision rests with the EU Justice and Home Affairs Council.

Plenkovic also said his government supports fellow EU members Bulgaria and Romania in their efforts to join the world’s largest visa-free regime at the same time alongside Croatia.

Romania and Bulgaria satisfied the technical criteria for Schengen entry years ago, but some EU members have expressed reluctance over to concerns over the countries’ ability to curb graft and uphold the rule of law. Experts are set to visit the two Balkan countries in the coming weeks to reassess their readiness.

Now, as they are managing to accommodate an influx of refugees due to the war in Ukraine and still protect the EU’s borders, the two countries want to be admitted to the zone next year as well.

“I wish them all the best, and if we are all ready to join on Jan. 1, I will open three bottles of champagne,” Plenkovic said.